RHOC - Braunwyn Windham-Burke Opens Up About Cancer Scare, Tells Her Fans To 'Get Checked Often'

Real Housewives of Orange County star Braunwyn Windham-Burke recently had a skin cancer scare, and she is urging her fans to pay attention to their health. The mom-of-seven posted a pic on her Instagram Stories from her latest visit to her dermatologist, and she explained that a mole on her arm tested positive for melanoma.

In the pic, fans could see a doctor examining a spot on Windham-Burke’s arm, and in the caption she wrote that the little mole that “looked kinda weird” came back positive for melanoma, and she was lucky that they caught it early. She added the message, “Get checked often.” 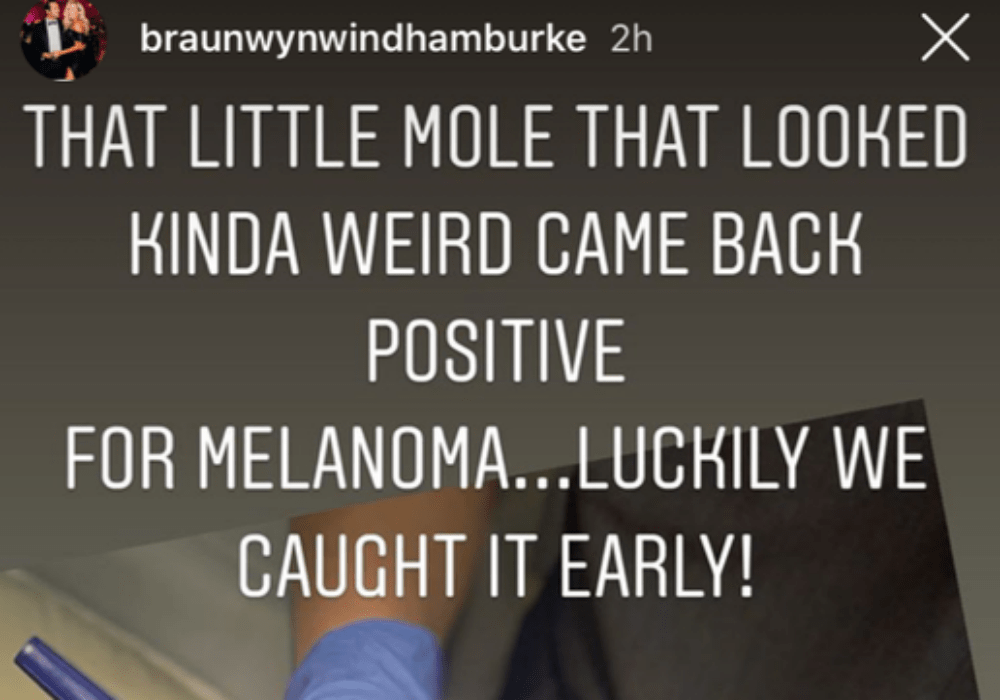 According to Bravo’s Daily Dish , other Bravolebrities who have had similar issues include Vanderpump Rules star Ariana Madix, who recently celebrated one year of being cancer-free after melanoma surgery.

As for Windham-Burke, she recently had fans talking when she posted a pic of herself with her husband Sean before they headed out to a charity event for the San Diego LGBT Community Center. In the photo, Sean was wearing red high heels for the Tantrums & Tiaras drag show. And, in the caption, the Barefoot in Heels blogger explained that they were supporting their kid and the LGBT community.

Windham-Burke’s 14-year-old son Jacob has recently expressed an interest in drag, and this was Sean’s way of supporting his son. But, after she posted the photo, Windham-Burke says her DMs were filled with hateful messages.

“It was Sean’s way of supporting his son and all the other kids that the youth center helps. But, more importantly, it was a way to take something that so many are uncomfortable of and try to normalize it,” explained Braunwyn Windham-Burke in an Instagram Stories video last week.

She added that waking up to all of the hate that her husband is getting for a pair of shoes goes to show why this is important. And, as long as a pair of shoes can be so pulverizing and divisive, it means we still have a lot of work to do because people aren’t understanding. Instead, they are judging.

Rihanna, who is about to give birth, continues to go out, surprising the audience with outrageous outfits