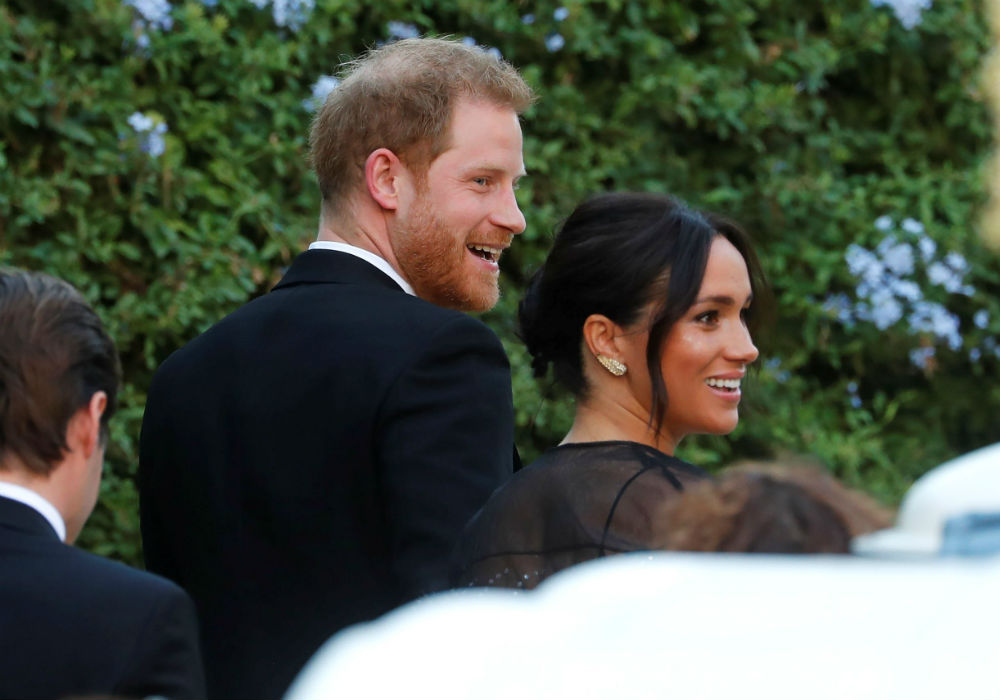 Meghan Markle and Prince Harry are in Rome to attend her good friend Misha Nonoo’s wedding, and the Duchess of Sussex stole the show when she arrived at the ceremony wearing a $13,500 Valentino gown. Markle ignored tradition by wearing a floor-length sheer black crystal-encrusted tulle gown with puffed sleeves to the star-studded event at the prestigious venue, Villa Aurelia.

Markle wore her hair in a low bun with loose tendrils, and she accessorized the look with gold feather-shaped earrings and a small red box clutch. While it may be common in the United States for women to wear black to a wedding, it’s a major break from tradition in Europe.

“Wedding guests usually shun black in favor of a more complementary color to pair with white…” stylist Lucas Armitage told FEMAIL. “Meghan isn’t one for playing by etiquette as we well know but even for her this is fairly shocking.”

Surprisingly, cameras caught other women arriving at the event wearing black, including model Karlie Kloss, who arrived with her husband Joshua Kushner, a good friend of the groom, Mikey Hess.

Lucas explained that Markle was “on trend” with recent runway styles, as “black sheer garments have been seen all over the catwalk” this season. The stylist says that Markle’s look for the wedding proves that she isn’t a slave to fashion, and instead, the Duchess “perfectly distills the catwalk into her own brand of on-trend chic.”

The sheer overlay and built-in spaghetti strap slip on Markle’s dress would have fit right on a Hollywood red carpet, but it was considered “risque” for European high society.

On the flipside, stylist Susie Hasler says that Markle’s choice to wear black was the “perfect way” for her to redirect the spotlight toward the bride and groom instead of on herself. Hasler explained to The Daily Mail that black is a clever color for Markle to wear if she wants to merge into the background and avoid accusations of trying to steal the bride’s thunder.

“If the Duchess had turned up in a bright red dress, for example, she would have been accused of attention-grabbing. Black is a good choice for being unassuming,” said Hasler.

The DoS stunned this evening at the wedding of her friend and Smart Set collaborator Misha Nonoo in Rome Italy. She is wearing The Embellished Tulle Evening Dress by the iconic Italian brand Valentino full dress description in the comments. Photo creds goes to @PaigeMASTERS5 pic.twitter.com/c6Gf9aZSp9

The “classic, timeless style” of Markle’s dress ticks a number of fashion boxes, says Hasler, and she adds that black has become more acceptable for wedding guests in recent years.