Lil Mo Reveals She Is Single After Her Husband Is Accused Of Stealing A Debit Card!

Singer Lil Mo has always had issues in her marriage with boxer Karl Dargan. The musician is separating herself from the father of her children after a story about him went viral.

Before they even made their TV debut on ‘Love and Hip Hop,’ it was rumored that Karl was being unfaithful to his loving wife. The couple headed to ‘Marriage Boot Camp’ to fix their relationship woes where even then — he was caught red-handed telling another woman on the phone to tell him that she loves him.

America watched after she defended her decision to stay with the athlete believing he would change, but Lil Mo recently made it know that she was single after a woman accused Karl of stealing her debit card at Dave and Busters!

“Get rid of the dead weight and #glowup” #LilMo 🔥

Ashley Gray took to Facebook where she alleged: “Okay so who would have everrrr thought. I take my son to Dave and busters for his birthday and my debit card was accidentally dropped and within 15 minutes of it being dropped Lil Moes husband (Karl Dargan) finds my card, does not return it, but instead uses it to purchase $170 worth of playing card for his children. The cameras in D&B confirmed that he was in possession of the play card purchased with my debit card. Once he noticed we were onto him he offered us one of his kids play cards for my kids to use and Eric Jones said ‘nah bro I want my debit card.'”

She went on to say: “At the moment this man walked away and packed his kids up and left the building without even paying for his food he ordered! The waiter is the one who told me he’s a well known boxer and lil moes husband who comes in there often. How can you have a verified Instagram account, a famous wife, been on love and hip hop, marriage boot camp, and couples court but yet you are stealing debit cards from people? I was robbed by a famous person y’all! Google his name, he got a couple dirty secrets with him. Can’t wait for him to take his dumb ass back to D&B so he can be arrested upon entry. Somebody tell Lil Moe her man owes me money.”

After the tea spilled on to the internet, Lil Mo responded to the barge of comments on her profile by letting one follower know that she is single.

Meanwhile, Karl denies the allegation that Gray made by stating that if he found a debit card — he would’ve maxed it out! 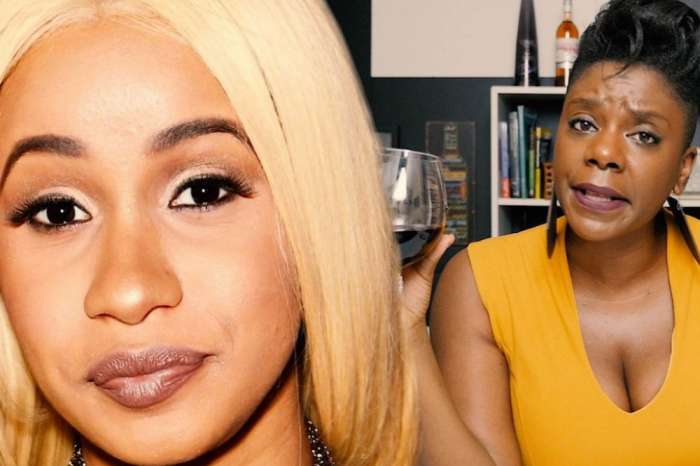