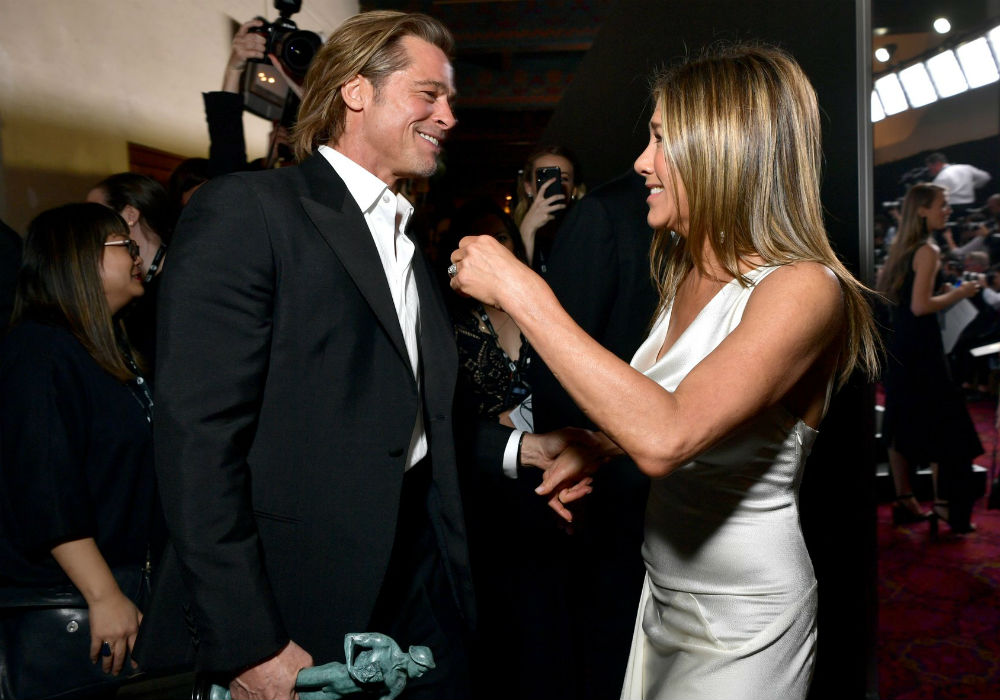 Brad Pitt and Jennifer Aniston nearly broke the internet last weekend when they were photographed backstage at the Screen Actors Guild Awards celebrating their respective wins. Pitt won Outstanding Performance by a Male Actor In A Supporting Role for Once Upon A Time…In Hollywood, while Aniston won Best Female Actor in a Drama Series for her role in The Morning Show.

However, despite the fan frenzy and the reemergence of the hardcore Brad and Jen shippers, Pitt says he hasn’t even noticed it’s happening and hasn’t read any headlines about the viral backstage reunion.

Therapist: so what brings you in today?
Me: *slams this picture of Brad Pitt holding Jennifer Anniston’s hand on the table* pic.twitter.com/RtiuRue5YJ

A series of pics from the evening had fans losing it, as one featured Pitt watching Aniston’s speech on a screen backstage and another captured a friendly run-in between the exes that featured Pitt holding Aniston’s wrist while they smiled at each other.

Aniston told Extra that Pitt watching her speech backstage was a “sweet” thing for him to do.

“We’ve all grown up together, we really have,” said Aniston. “It just feels like a really fun night to celebrate and cheer each other on and keep working. You don’t really have that much of a life, so it’s nice to come out and put a pretty dress on and celebrate your friends and their work and inspire each other to keep going.”

Photographer Vivien Killilea Best captured the moment that Pitt and Aniston ran into each other backstage, and she posted the pic on Instagram. In the caption, she wrote that the reunion everyone has been waiting for happened on Sunday night.

No wrinkles… harder than it looks! Somewhere between these two photos, my peers gave me a gift I will cherish and a night I will never forget. Thank you @sagawards, @themorningshow, and our incredible cast and crew. Let’s get back to work!

Best explained that she was backstage at the SAG-AFTRA awards and heard a familiar voice shout “Aniston! Aniston!” When Best turned around, she saw “this gem of a moment happen.”

The day after the SAG Awards, Jennifer Aniston posted on Instagram about her amazing night and revealed how she managed to keep her Dior gown wrinkle-free. Aniston shared a pic of herself slumped down in the back of an SUV flashing a peace sign. And, she also posted a pic of an outdoor bathtub with her SAG award and gown draped over the edge and her heels on the ground.

“Somewhere between these two photos, my peers gave me a gift I will cherish and a night I will never forget. Thank you @sagawards, @themorningshow, and our incredible cast and crew. Let’s get back to work!” wrote Aniston.

I think Jen really wants Brad back, but I bet he’s still strung out on Angelina Jolie it seems
I think he misses family life.