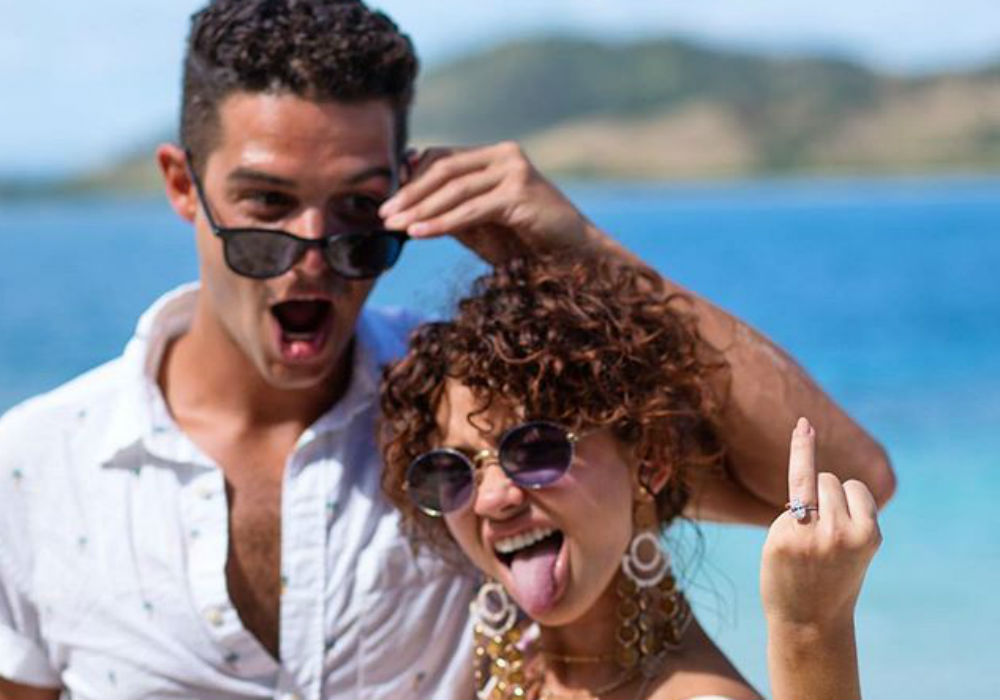 Bachelor in Paradise bartender and Svedka spirit guide Wells Adams had everything planned for his proposal to Modern Family star Sarah Hyland. But, when they went through security in Fiji, the TSA almost ruined everything.

Speaking with Us Weekly, Adams explained that he had a custom Lorraine Schwartz engagement ring made for Hyland, and he hid the ring in his drone case while traveling. However, when they flew into Fiji this summer, he discovered that when you have a drone and they see it in the X-ray, they inspect it.

The Your Favorite Thing podcast host said that he was “really scared” that security was going to open the drone case and Hyland would see the box marked “LS” for Lorraine Schwartz, and “it was going to be over.”

When customs told him that they had to inspect the drone, Adams took a chance and told them that he needed to speak with them privately, which he is sure you aren’t supposed to do when someone is about to check your stuff.

“And when we got in there, I was like, ‘Hey, man, there’s an engagement ring in there, play it cool.’ … There was a moment where I was like, ‘Am I going to do this in the, like, Fijian Customs?’” said Adams.

Luckily, the TSA agents worked with him, and he didn’t have to get down on one knee in the airport. Instead, Adams proposed on the beach after a picnic, and he captured it all on video. Adams posted a video montage that featured the proposal on Instagram, and in the caption he wrote, “I’ll be Johnny, you be June. But forever.” This, of course, is a reference to the legendary romance of Johnny Cash and June Carter Cash, and the lyrics from a Drew Holcomb & the Neighbors song that is playing on the video.

On her Instagram, Hyland posted a pic of the couple and quoted the 1995 Olsen Twins movie It Takes Two.

That can't eat, can't sleep, reach for the stars, over the fence, world series kind of stuff ✨❤️ @wellsadams

“That can’t eat, can’t sleep, reach for the stars, over the fence, world series kind of stuff,” wrote the 28-year-old.

Adams says not much has changed since he and Hyland got engaged, but it’s fun to call her his fiancée now. The couple has not yet set a date for their wedding, but Hyland isn’t too concerned about the wedding details. She said that a lot of mistakes that people make is that they are excited to have a wedding and not a marriage.