In 2017, Corey Feldman made headlines for several reasons. First, he went viral when Marilyn Manson was injured after a prop fell on him and crushed his leg, and Corey accused the shock rocker of faking the incident. The next was when Corey posted a video on YouTube announcing a fundraiser so he could make a documentary that would expose a Hollywood pedophile ring. He was going to 'name names' once and for all and reveal who had sexually abused the 'Two Coreys'.

Corey Feldman is regarded as one of the earliest voices in Hollywood to call out pedophilia. In 1993, the Santa Barbara police questioned him about pedophilia allegations against Michael Jackson. Corey Feldman was close friends with Michael as a child, spent time in his home, and slept over his house. Many suspected that if the King of Pop had sexually abused anyone in Hollywood, it would have been Corey Feldman. Much to law enforcement's dismay, Corey had no information to give them. He did; however, drop the names of several pedophiles who he said sexually abused him, but the police never followed up.

Over the years, Corey Feldman would continue to make statements about Hollywood's problem with pedophilia, and as he did, his public persona shifted. Once viewed as a teen heartthrob who surrounded himself with beautiful blondes and battled addiction, along with his close friend Corey Haim, Corey Feldman was now viewed as someone who was a loose cannon, ready to blow up Hollywood's darkest secret — pedophilia.

As the Harvey Weinstein case proved, predators don't take being exposed lightly. In November 2017, Ronan Farrow broke the story that Weinstein had an 'army of spies' tracking down the moves of his long list of victims. The media also buried stories through a process called catch and kill, keeping Harvey Weinstein's dark secrets away from the public.

What might be most ironic, is that Rose McGowan, who alleged that in 1997 Harvey Weinstein raped her, also began dating Marilyn Manson later that year. The two turned heads in 1998 when they walked the MTV VMA's red carpet, and Rose wore a see-through dress. In 1997, Corey Feldman also met Marilyn Manson, even spending time at his home when Marilyn and Rose lived together.

By 1998, Corey Feldman and Marilyn Manson would be at war with each other and according to Corey, Marilyn Manson has not only tormented, harassed, and abused him, but sent spies into his home and music tour to silence him from revealing the truth about Hollywood pedophiles.

Here is a photo of Corey Feldman with Marilyn Manson and Rose McGowan in 1998. 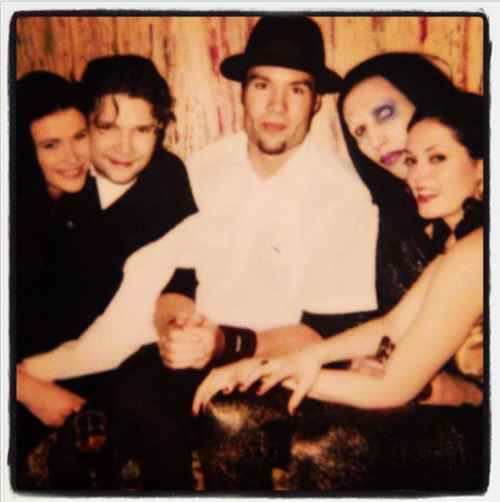 You may see a report about Harvey Weinstein's 'Army of Spies' and the tactics he used to ensure his victims remained silent below.

In 2017, Corey Feldman and Rose McGowan's paths would cross again.

Just as they had years ago, before the decades-long war would ensue between Corey and Marilyn, they would both step into the spotlight to expose their abusers.

Rose McGowan spoke openly about her 1997 alleged rape and was one of the most vocal celebrities to demand justice for Harvey Weinstein's victims.

Meanwhile, Corey Feldman decided it was the right time for him to speak out too. He launched his Truth Campaign in 2017, feeling somewhat protected by the exposure the Weinstein case was drawing. Only things quickly veered off course.

Corey Feldman, as he promised to expose Hollywood pedophiles, found himself viciously attacked on social media. Cyberbullies hounded him 24/7 and the online cyberstalking and bullying continues — as it has since 2017.

He feared for his life and safety. His wife, his ex-wife, and his son have all spoken in Corey Feldman's documentary My Truth: The Rape of Two Coreys about the harassment they have endured since Corey Feldman began speaking out about Hollywood pedophilia and promised to 'name names.'

It has been reported to this writer that there are many in Corey Feldman's circle who are now terrified for themselves and their families to speak out and share what they know.

Yes, you read that correctly.

Because of what has happened to Corey Feldman on social media, other former child victims of Hollywood sexual abuse will not speak out for fear the cyber-stalkers and harassers will target them in a non-stop 24/7 barrage of attacks.

You may see some tweets that Corey Feldman posted about Marilyn Manson back in 2017, when he became injured on stage, right when the Harvey Weinstein story broke. Marilyn Manson was injured on stage on September 30, 2017. The New York Times broke the Harvey Weinstein story after their exhaustive investigation on October 5, 2017.

Here is a link to Corey Feldman's tweets regarding Marilyn Manson's stage accident.

Corey Feldman began his Truth Campaign in the middle of October 2017. On October 30, 2017, NBC, after killing a story on Harvey Weinstein's victims, had Corey Feldman on two of their shows: Megyn Kelly and Matt Lauer. Both drew fire for the way they addressed Corey Feldman and accused him of being after money.

Since 2017, Corey Feldman has been adamant that Marilyn Manson has worked to silence him. He has even alleged that two of his ex-band members were collecting information on him and reporting back to Marilyn Manson. He has made the accusations repeatedly, publicly, and in interviews. He's been accusing Marilyn Manson of working to silence him since 2017.

On February 1, 2021, Corey Feldman alleged that Marilyn Manson sent two women into his home to spy on him. Since the onslaught of additional allegations has been raised, some are now asking if Marilyn Manson wasn't trying to silence him from exposing Hollywood pedophiles, just as Harvey Weinstein and his 'army of spies' had targeted his ex-girlfriend.

In December 2017, Marilyn Manson gave the U.K.'s Channel 4 an interview where he addressed Rose McGowan's allegations against Harvey Weinstein. According to Manson, he really didn't know much about it, even though the rape allegedly occurred within a year of the couple dating.

Otep Shamaya On Marilyn Manson Abuse Allegations — His Wife Lindsay Usich Is A Victim, May He Rot!