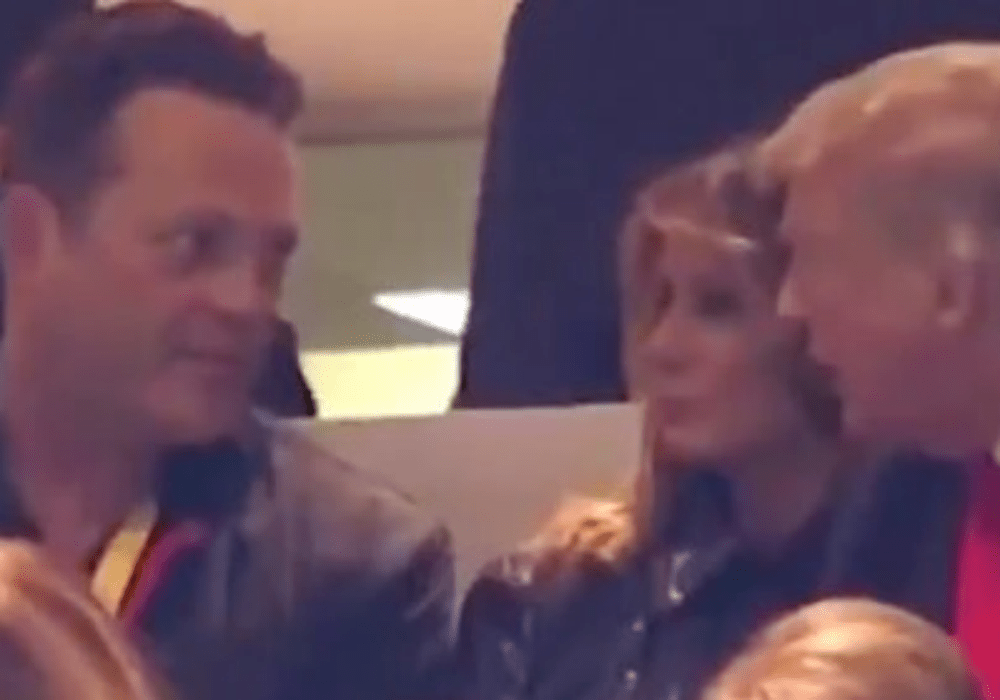 Vince Vaughn attended the college football national championship game between LSU and Clemson on Monday night in New Orleans. And, after the Wedding Crashers star was spotted shaking hands with President Donald Trump during the game, some fans on social media are calling for him to be canceled.

According to Too Fab, journalist Timothy Burke posted a video that featured Vaughn sitting next to President Trump and First Lady Melania Trump in a luxury VIP suite. Vaughn chatted with the couple for a bit before standing to leave, and then he smiled and shook Trump’s hand.

Apparently, that’s all it took for some fans to cancel Vaughn.

The actor has never publicly endorsed the POTUS or spoken in favor of him. Instead, he is a vocal Libertarian who supported Senator Rand Paul for President during the 2016 election. He is also someone who appeared to be respectful and polite during an unexpected run-in with the President of the United States.

After the video went viral, one Twitter user declared Vince Vaughn canceled. Another claimed to be a big fan of Vaughn, but found the short video with Trump to be “gross.” Others have expressed their disappointment over the brief social interaction, and claimed to no longer find the Dodgeball star funny or entertaining.

Senator Marsha Blackburn – a Republican from Tennessee – tweeted, “OK, people. You say you want to see civility return to the public square, and then you come at Vince Vaughn because he is being civil? Really? Get a grip!”

I'm very sorry to have to share this video with you. All of it, every part of it. pic.twitter.com/ELMbDHZbZq

Some might remember last fall when Ellen DeGeneres caused outrage on social media for sitting next to former President George W. Bush at a Dallas Cowboys football game. DeGeneres addressed the Twitter outrage on her daytime talk show, and said that when people get mad, they tweet.

DeGeneres then shared a tweet from a fan who said seeing DeGeneres and Bush together made them have faith in America again.

“Exactly. Here’s the thing. I’m friends with George Bush. In fact, I’m friends with a lot of people who don’t share the same beliefs that I have,” said DeGeneres. “But just because I don’t agree with someone on everything doesn’t mean that I’m not going to be friends with them. When I say, ‘be kind to one another,’ I don’t only mean the people that think the same way that you do. I mean be kind to everyone.”

Is it really a crime in Hollywood – who everyone knows leans extremely far left on the political spectrum – to shake hands with President Trump? What do you think?