Vanderpump Rules star Jax Taylor stirred up some controversy over the weekend after he made a statement on Instagram that claimed the novel coronavirus pandemic is “punishment from the man upstairs.” The comment was so unpopular that Taylor had to turn off his comments before deleting the post entirely.

The 40-year-old reality star - whose real name is Jason Cauchi - made the controversial statement in a Sunday post before deleting it and reposting on his Instagram Stories. Of course, it was gone after 24 hours, but there were plenty of screenshots circulating for fans to see what he wrote. 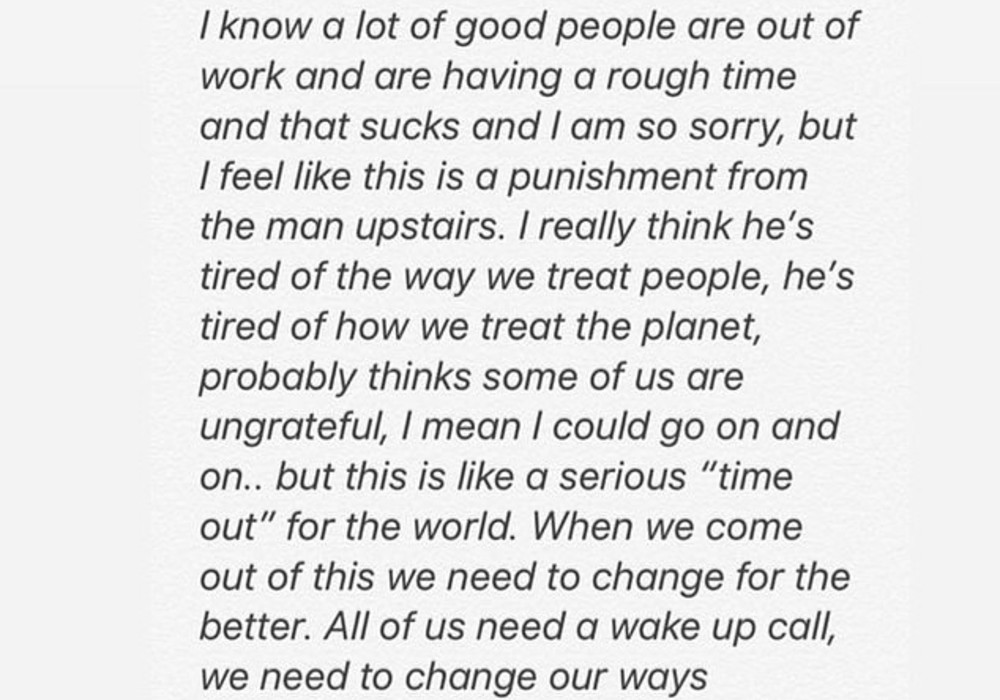 The model and SUR bartender began his post by writing that he knew a lot of good people were out of work and having a rough time because of COVID-19, and Taylor said “that sucks and I am sorry.” He then insisted that the pandemic is “ punishment” from God.

“I really think he's tired of the way we treat people, he's tired of how we treat the planet, probably thinks some of us are ungrateful, I mean I could go on and on.. but this is like a serious "time out" for the world,” said Taylor.

“The true test will be how we come out of this, and when we do, remember what it was like when our freedom was taken from us. Let's show the man upstairs that we can do better for ourselves and humanity,” wrote Taylor.

Brittany Cartwright’s husband concluded his statement by writing that God has “done so much for us,” and now is the time to “pay him back.”

Despite the negative reaction on Instagram, Taylor also posted the message on Twitter and got some positive feedback. One fan wrote that the message was “nicely put,” and we should look at this time as an opportunity to self reflect while always keeping faith in God.

There were still plenty of haters who were offended by Taylor’s post.

“Please tell this to people who are sick and people with family and friends who are sick and have died. I’m sure this will comfort them,” wrote one unhappy fan. Others pointed out that Taylor is a hypocrite because of how he treats people on Vanderpump Rules .

Kate Middleton Gets Exposed To COVID-19 And Is Self-Quarantining - Details!