Former Vanderpump Rules star Stassi Schroeder recently revealed that she is expecting her first child with fiance, Beau Clark . And, earlier this week on her Instagram Story, Schroeder pulled up her shirt and gave her fans a bare baby bump update.

Schroeder shared a mirror selfie that featured the Next Level Basic author wearing a long-sleeve black top and pink shorts with socks, while her hair was tied up in a knot on the top of her head. 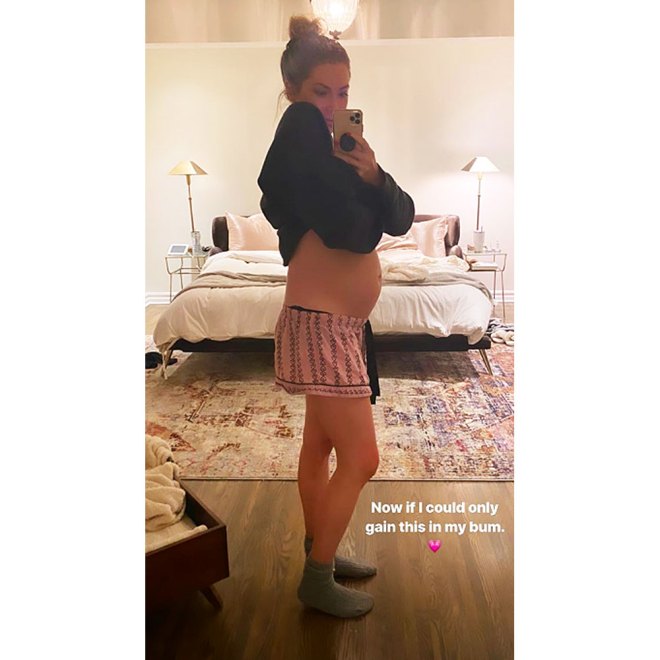 In the caption, the 32-year-old joked: “Now if only I could gain this in my bum.”

The baby bump update comes just weeks after Schroeder revealed that she was expecting a baby girl. The Louisiana native posted a pic on her Instagram (which has been set to private since being fired from Vanderpump Rules in early June), that featured her smiling and cradling her tiny bump under a dusty rose pink dress.

Clark stood next to Schroeder in the pic and kissed her on the cheek while holding a hot pink onesie that read #OOTD, a nod to Schroeder’s popular "Outfit of the Day" posts.

“We’re having a baby girl,” wrote Schroeder in the caption.

Clark also posted a gender reveal pic on his Instagram, and the 40-year-old casting director wrote in the caption that he was thankful to be having a daughter.

“I was raised by great women, and the lessons I learned from them I’ll FW to my daughter and then some! She will be great, powerful, humble, kind, loving, compassionate and a dash from Kesha. ‘She’ll be a motherf–king WOMAN!!!’ #thankful," wrote the 40-year-old commercial casting director.

Clark popped the question in July 2019, and he and Schroeder planned to get married this October in Rome. But, due to the COVID-19 pandemic, the couple was forced to postpone their wedding plans and they decided to get straight to the babymaking.

“I know I want to be a mom, so I would rather get knocked up before I waited to have a wedding,” Schroeder told Us Weekly just days before Clark proposed. “It’s powerful to let women know, if that’s something that you want, you don’t have to wait to get married. You’re in charge of your own body and what you want in your own life.”

Stassi Schroeder is due to give birth to her first child in the first week of January 2021.

Rihanna And Kim Kardashian Baffle The Internet With Leggings That Have Butt Cutouts And Butt Cleavage!

Kardashians And Other Celebrities' Favorite Estate Casa Aramara In Mexico, Burns Down