Toya Wright's daughter, Reginae Carter posted some new pics in which she's flaunting her curvy figure in a pink outfit.

As expected, her diehard fans praised both the outfit and Nae's curves, but Tiny Harris jumped in the comments to say something.

Now, whoever knows Tiny knows that she is referring to the fact that Nae is wearing a Gucci bag and everyone knows by now that the Harris family are boycotting the brand following the blackface scandal.

Tip was the first in the family to slam the brand and tell everyone that they should boycott it.

Some of Nae's followers agreed with Tiny.

'Treat me like an option, and I’ll show you how many I got 😏 Bodysuit from @letsvoguegirls' Reginae captioned the photo. 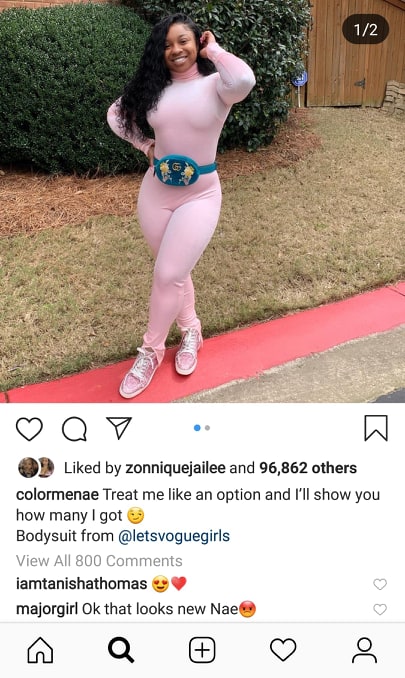 One fan told Nae 'SHOW GUCCI YOU GOT MORE OPTIONS...HE TREATED US LIKE WE A OPTION!'

Nae recently made fans sad with one of the photos that she shared.

She posted a photo with Rudy Johnson, Toya Wright’s late brother on her social media account.

You may recall that both he and Toya’s other brother Josh Johnson got killed a few years ago and the family suffered a tremendous loss. All of them are missing the two young men.

Amber Rose And AE Were Spotted Together - See The Photos