Tiffany Trump has shared a cryptic message on her official Instagram account and it has people talking. Just days following her father's, President Donald Trump's, decision to fire his personal assistant Madeleine Westerhout, people want to know if Tiffany's Rumi quote was speaking about the controversy. Westerhout reportedly went to dinner with several reporters, drank too much, and made disparaging remarks on the President's behalf about his feelings towards his youngest daughter, Tiffany Trump.

Reports indicate that Madeleine also made comments about Barron Trump and his eating habits. Some of the reported comments referred to Tiffany Trump's appearance and indicated her father said she was overweight and didn't like to be photographed with her. President Trump denied making the remarks.

"Study me as much as you like, you will never know me. For I differ a hundred ways from what you see me to be. Put yourself behind my eyes, and see me as I see myself. Because I have chosen to dwell in a place you can’t see." Rumi.

Now, some are asking if Tiffany has shared the poem in response to her father, the public, or to Westerhout directly. You may see the message that Tiffany Trump shared on Instagram below. 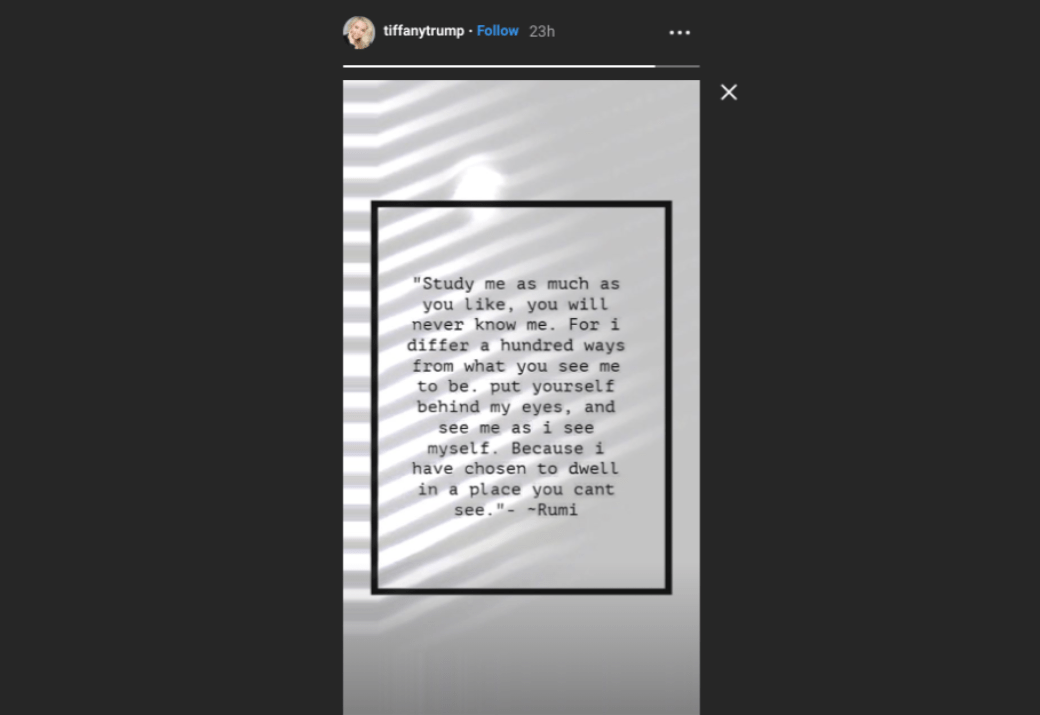 While Tiffany is dealing with the aftermath from the remarks, there are many in the public who are concerned for her well being. Her official Instagram account, that has more than 1 million followers, received messages throughout the weekend from people who are offering her encouragement and telling her not to listen to the reports.

Some have gone so far to blame Donald Trump for the remarks and are telling Tiffany Trump not to listen to what her father says about her. For the record, President Donald Trump did not say anything negative about his daughter, called the remarks blatantly false, and said they are not true. He also said he plans to talk to Tiffany as soon as possible to let her know how much he loves her. It is unknown whether the President has spoken to Tiffany yet. What do you think about her cryptic message? Who do you think it was directed towards?

For The First Time In A Long Time, Barron Trump Appeared In Public, But Everyone Was Fixated On His Cheeks

The First Wife Of Donald Trump, Ivana Trump, Died After Falling Down A Flight Of Stairs

Protests Persist In Iran Following The Death Of Mahsa Amini, And Angelina Jolie Says Women There Need The Freedom To Live Their Lives

After Seven Years As Host Of The Daily Show, Trevor Noah Has Decided To Step Down