It’s been an eventful few days for the Bravo reality series Southern Charm . Even though shooting for Season 7 has been suspended due to the COVID-19 pandemic - and Bravo has yet to announce a premiere date - a serious cast shake up has been revealed on social media. Things appear to be so bad that disgraced former cast member Thomas Ravenel doesn’t want to be a part of it.

Earlier this week, star Cameran Eubanks revealed on Instagram that she would not be returning to Southern Charm after being a full-time cast member for all six seasons since the series premiered in 2014.

Immediately, rumors started to swirl that Eubanks was leaving the show because she didn’t want her husband’s infidelity made public. However, Eubanks slammed the rumor with a lengthy post on Instagram, saying that her marriage is just fine and these kinds of vicious rumors have confirmed her decision to ditch life as a reality TV star.

In the comments section of Eubanks’ post, her co-star Naomie Olindo wrote: “I’m so damn proud of you and us @chelseameissner58.” Later, both Olindo and Meissner confirmed on their Instagram Stories that they both have left Southern Charm and won’t be a part of Season 7.

All three women say that they left Southern Charm months ago, and now Ravenel has chimed in with his own claims. In two now-deleted tweets, Ravenel expressed his frustrations with Southern Charm and revealed that producers had offered him the chance to return to the series after firing him in 2018 because of two sexual assault claims against him.

“So Cameran Wimberly, Chelsea Meisner [sic], Naomie Olindo as did I refused to return for another season of Southern Charm ,” wrote Ravenel. “I obviously know why. Is anyone curious?”

In a second tweet, Ravenel wrote that it takes 40  hours of filming for one 40-minute episode of Southern Charm . However, a cast member can’t say the word “edit.” 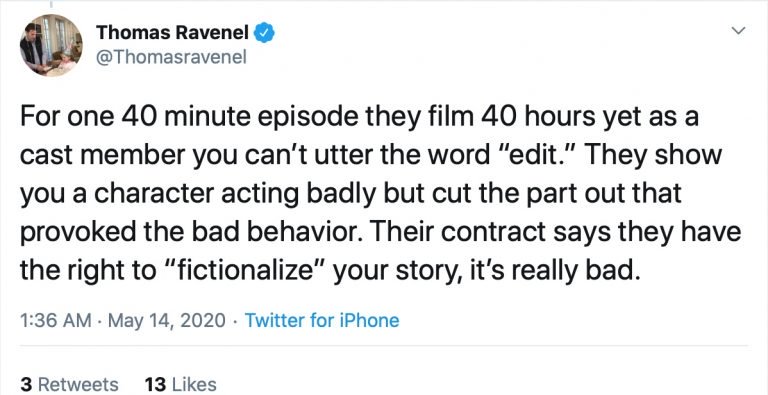 “They show you a character acting badly but cut the part out that provoked the bad behavior. Their contract says they have the right to “fictionalize” your story, it’s really bad,” wrote Ravenel.

The former South Carolina treasurer also defended his ex Kathryn Dennis when she was attacked for being “racist” and a “white supremicist” after she sent Charleston activist and radio host Mika Gadsden a monkey emoji in a message.

Even though numerous fans replied to Ravenel’s tweet that asked if anyone was curious as to why all the cast members are leaving Southern Charm , Thomas Ravenel never responded.