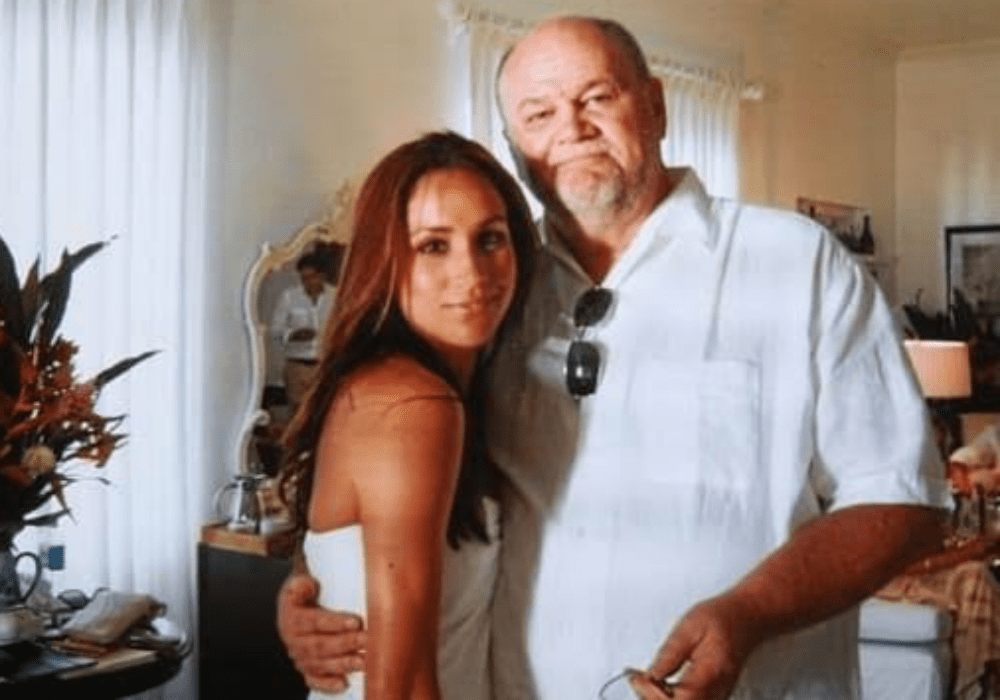 Meghan Markle has been estranged from her dad, Thomas Markle, since her wedding to Prince Harry in May 2018 after he allegedly staged paparazzi photos, and then skipped out on walking his daughter down the aisle. Now, in a new documentary, Thomas is opening up about what really happened in the days leading up to Meghan and Harry’s wedding, and he explains why he believes the royal family owes him.

Thomas – a former Hollywood lighting director – says in the new doc Thomas Markle: My Story that he did stage the paparazzi photos and he still makes money off of them. He explained that “those pictures will sell forever.”

Those photos were an embarrassment for Meghan, but a profitable venture for Thomas. The pics featured the 75-year-old lifting weights, running up a hill, getting measured for his wedding suit, and reading a book titled Images of Britain.

According to The Mirror, the pictures originally sold for $100,000, and Thomas received 30 percent. He explained that the pictures were his way of fighting the media narrative that he was a “dumb fat slob.”

“I got approached by a guy who spoke to me and said, ‘I can change your image,’” said Thomas. “The idea was that these would all be candid shots, discreet, no one would know they were posed or anything.”

Thomas says the guy kept telling him he had done things like this a hundred times before, and he asked for Thomas to trust him. Still, he had his doubts, and thought that the pics looked “hammy.”

Once the pictures were set to be published, Thomas admits that he lied to Prince Harry and Meghan Markle when they called to warn him. Thomas said he denied his involvement, and “of course that was a lie.” Meghan’s dad does admit that he’s not proud of that.

Thomas still insists that he missed Meghan and Harry’s wedding because he suffered a massive heart attack, and he claims that doctors told him a flight to London would kill him. In the doc, Thomas attempts to prove his claims by providing medical notes.

Thomas Markle says he still feels like a victim because his daughter has cut him out of her life. He hasn’t even met his grandson, Archie Harrison. And, he says he shared the letter Meghan wrote him with the press only because Meghan’s friends were attacking him in the media.

“They dissed me, calling me a liar,” he said. “Now it’s become an organized defamation of me. So I felt I had to defend myself, so I published part of the letter.”

Thomas says he will continue to defend himself, and he has no problems asking to be paid for interviews. He says that at this point, the royal family owes him – Harry owes him, and Meghan owes him – because he should be rewarded after what he’s been through.

Thomas Markle says that Meghan always promised to take care of him when he got older, and now that he’s in his senior years, “It’s time to look after daddy.” However, at this point, he doesn’t think that he’ll see Meghan again because she and Harry don’t want to talk to him.

Diddy Honours Kim Porter And Erica Mena Is Here For It