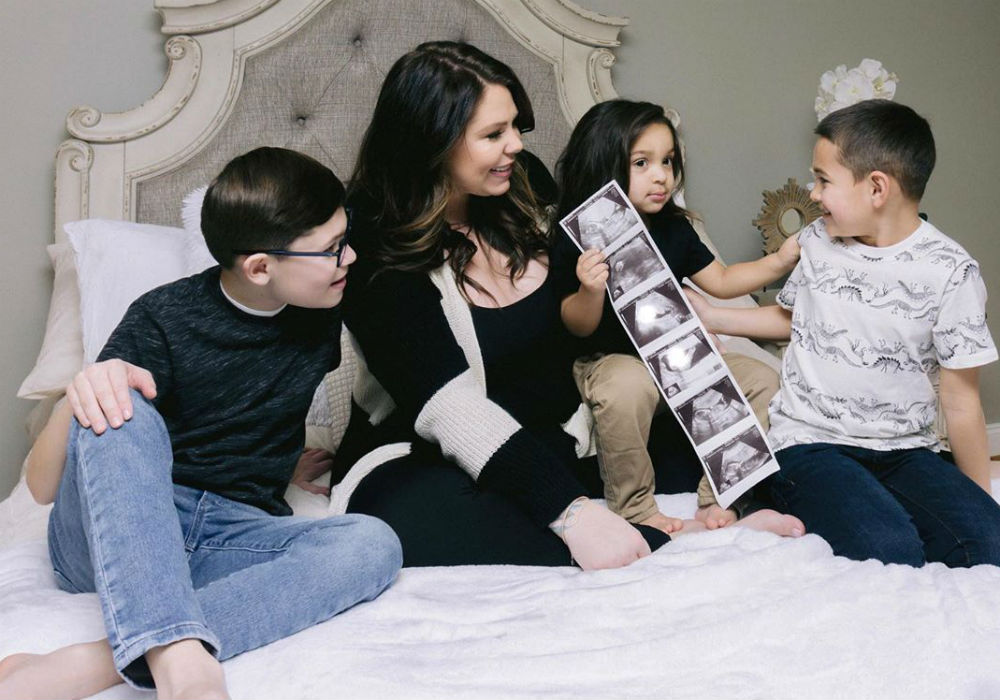 Teen Mom 2 star Kailyn Lowry recently announced that she was pregnant with baby number four. And now, the 27-year-old and her three boys – Isaac, 11, Lincoln, 6, and Lux, 2 – have revealed the baby’s gender in a new Instagram video.

In the clip – which was filmed for Teen Mom 2 – Lowry, her three sons, and friend Natalie and her son are holding confetti cannons. And, when Lowry counts them down and gives them the cue to twist and pop, they are all immediately covered in blue streamers and confetti. Yes, Lowry is having another boy.

Lowry shares Isaac with her ex Jo Rivera and Lincoln with her ex-husband Javi Marroquin. Lux’s dad is Lowry’s on-again, off-again boyfriend Chris Lopez, and he is also the dad of baby number four.

“The kids and I are so excited to be adding another baby boy into the mix,” Lowry told Us Weekly. “Thank you all so much for your continued support & well wishes. Hopefully, the rest of this pregnancy will go smoothly as we anticipate the arrival of our newest addition.”

The PotHead Hair Care revealed via Instagram on February 4th that she was almost 16 weeks pregnant, and she admitted that her first trimester was a tough one. She explained that she had dealt with nausea and morning sickness, plus she had absolutely no energy. But, she was starting to feel better and she hoped it stayed that way.

Lopez was not part of the gender reveal, and he wasn’t in the photo Lowry posted for her pregnancy announcement. Instead, the pic featured the MTV star sitting on a bed with her three boys while she held sonogram pics.

Chris Lopez Gives Surprising Answer When Asked if He's Having Another Baby With Kailyn https://t.co/nTvTeAZYIj

Lowry and Lopez have been on and off for years, and she told Dr. Drew at the Teen Mom 2 reunion in December that they didn’t have a co-parenting relationship at the time. She explained that Lopez was in therapy and working on himself, and she added that Lopez would see Lux when the time was right.

However, Lowry has made it clear that she and Lopez are “always together even when we’re not together,” and they will always be close. Lopez did admit during a Twitter Q&A in October that he wished he would have been there for Lowry when she was pregnant with Lux, and it appears that he will be part of the new baby’s life.

Chris Lopez will not be on Teen Mom 2, though. Kailyn Lowry explained that Lopez has zero plans to appear on the reality show because he watched Rivera and Marroquin take advantage of her being on the show and the platform it brought them.

“He doesn’t want to be that person,” said Lowry.

As for having another boy, one Twitter user told the Coffee Convos podcast host that she would need to get pregnant with baby number five and try for a girl. “Lmaooo starting 5 basketball team coming right up,” replied Lowry.