Taylor Swift told the whole world that her former manager, Scooter Braun who’s also bought her whole discography, is now stopping her from performing older songs at the American Music Awards. The star made it very clear that she was upset and deeply hurt but fortunately, she has some dedicated supporters, be it fans or fellow celebs.

One of them is none other than her friend, Selena Gomez who took to her platform to post a lengthy and powerful letter regarding the drama.

‘My heart is so heavy right now. It makes me sick and angry. It’s greed, manipulation and power. There's no heart or thought of anybody else’s. No respect for the words that my friend's written since she was a 14 year old in her bedroom. You robbed and crushed one of the best songwriters of our time an opportunity to celebrate all her music with the fans and world,’ Selena wrote on her Instagram.

This new development in the feud between Taylor and Scooter comes just before the AMAs where she was apparently planning on performing a medley of her biggest hits since she is also being honored for being the Artist of the Decade!

If that is the case, how sad is it that she can’t perform her own songs she wrote and created ten years ago?

Selena went on to add, in part: ‘Taylor is the most dedicated, fearless, feisty, strongest woman I’ve ever known. People can say b****, but that’s called a woman with true identity and strength who takes no s***. I listened to Fearless before it came out and I remember us jumping on a bed and she was so proud of her diary being read by the world. Nervous of people not liking it…but it  became one of the biggest records — an album that saved so many young women who felt alone.’ 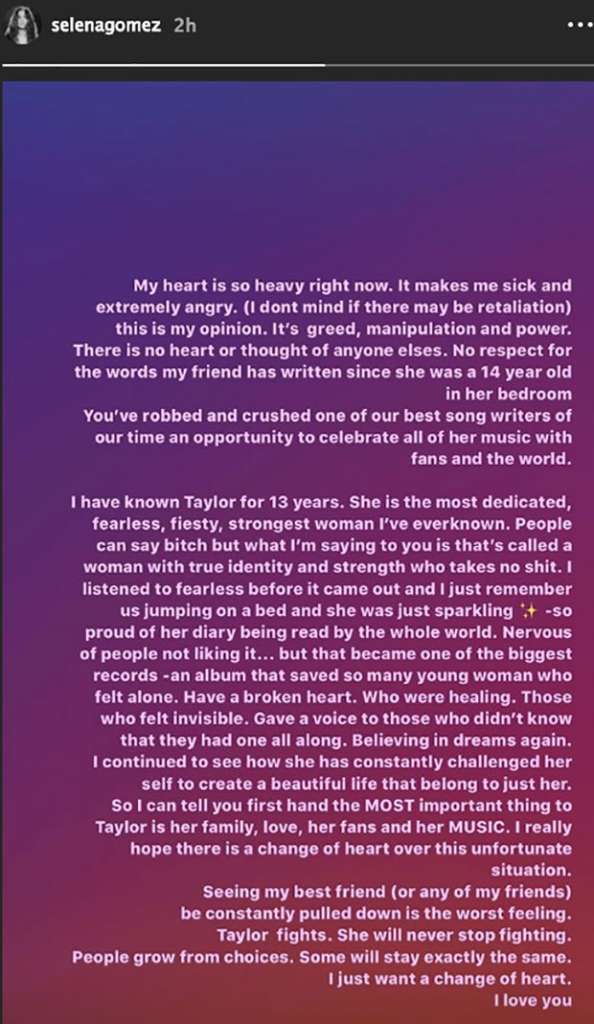 Allegedly, not only is Taylor not allowed to perform the old songs on TV but she is also prohibited from using footage of it in her upcoming Netflix documentary!

However, a rep for Big Machine, the record company she is no longer under, denied all of Taylor’s claims, saying she is legally free to perform the songs wherever she wants.

The same thing applies to the footage she would like to use in the documentary about her life.

Selena Gomez Breaks Down Her Most Iconic Looks And Reveals Taylor Swift And Britney Spears Were Two Of Her Biggest Style Inspirations - Video!

Kandi Burruss Congratulates A Friend For Starting A New Business

David Adefeso Asks Fans A Question About His Look