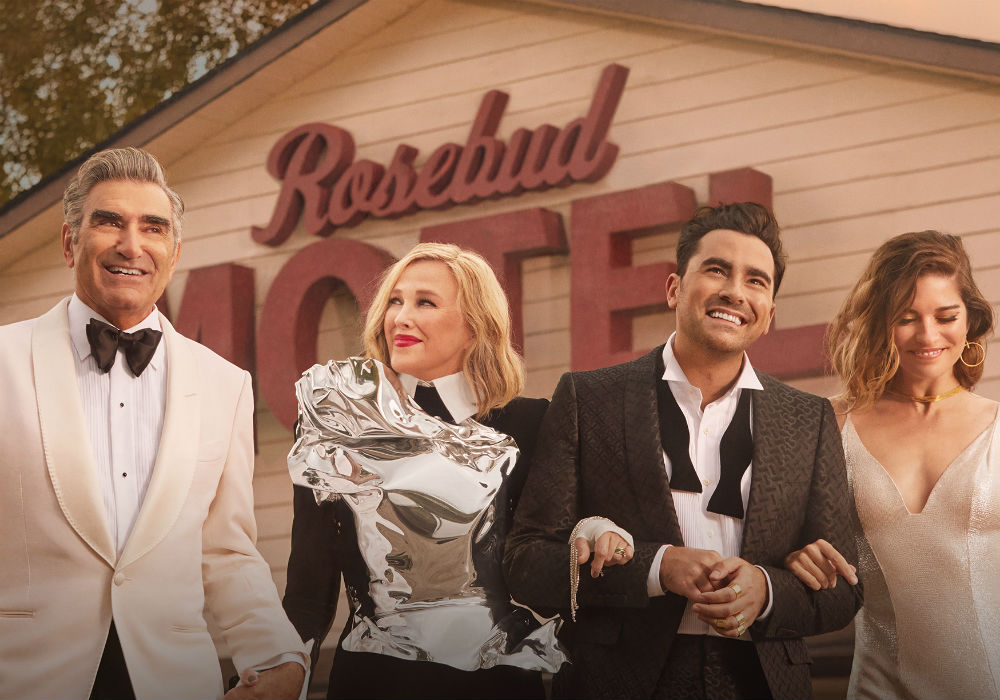 The sixth and final season of Schitt’s Creek is almost here, but creator and star Dan Levy isn’t ready to say goodbye. Just as the show is achieving mainstream success and scoring multiple Emmy nominations, the Roses are beginning their farewell season.

The cast and crew began shooting the final episodes last spring, and it turned out to be an emotional experience for Levy (David Rose) and his co-stars Eugene Levy (Johnny Rose), Catherine O’Hara (Moira Rose), and Annie Murphy (Alexis Rose).

“𝐼 wasn’t ready to go, but the story was set up to be finished.” —@danjlevy on #SchittsCreek https://t.co/p92XKqwNxB

After doing the read-through for the final two episodes, O’Hara said she cried so much that she looked like Alice Cooper, and Dan Levy found himself randomly crying in the grocery store.

“It was really, really hard,” Levy told GQ. “The last day of shooting was the most emotional day I think I’ve ever had in my life. I cried for, I want to say, five straight hours, to the point where I had a splitting headache and didn’t know what to do with my life. I wept when I took David’s shoes off. I will never wear those shoes again—nor do I want to—but I was very sad to take them off.”

Still, the cast believes this is the perfect time to go. Eugene Levy – who is Dan’s real-life dad, and also his TV dad – pointed out that they are still on “an upward trajectory,” and the audience continues to grow each season.

Surreal to think of how far this show has come. Honored to get to share these last 14 episodes with you all beginning tonight with our season premier on @CBC and @PopTV. I hope you enjoy them as much as we enjoyed making them. X https://t.co/eSAOqI770W

Schitt’s Creek premiered on CBC in Canada and on Pop TV in America back in 2015. But, it wasn’t until the show landed on Netflix in 2017 that millions of viewers started to discover this sweet story about a once-wealthy family who is forced to move to a tiny town in the middle of nowhere after losing their fortune.

Inspired by actress Kim Basinger buying a small Georgia town in the late 1980s, Dan Levy created Schitt’s Creek after asking himself what would happen if a family like the Kardashians suddenly lost everything they had. The series began with the Roses being forced out of their wealthy lifestyle due to corrupt business managers, and their only asset left was a town that Johnny bought for David as a joke.

Now that it’s Season 6, the Roses have settled down into life in Schitt’s Creek, and fans can’t wait to see how the story ends.

“From start to finish our show will be exactly what it was intended to be,” said Dan Levy. “The biggest mistake you can make in TV is shifting the focus away from characters and the storytelling to servicing audience expectations. The audience is there because you’ve done something right.”

Levy started to think about how he would go about ending the show during Season 3. And, after it got picked up for two more seasons during Season 4, he decided that a six-season run would be perfect.

Even though he “wasn’t ready to go” when the time arrived, the story was set up to be finished. Levy says that he wishes there was more story to tell because he would love to do this forever. But, respecting the characters and the quality of storytelling made him feel like six seasons was more than enough.

“I had intended to end it in season five, and then we got picked up for two seasons,” explained Dan Levy. “And I thought, Okay, well…now I can spend 28 episodes instead of 14 building the last couple chapters of this series. The minute I knew that was the minute I started writing to the end.”