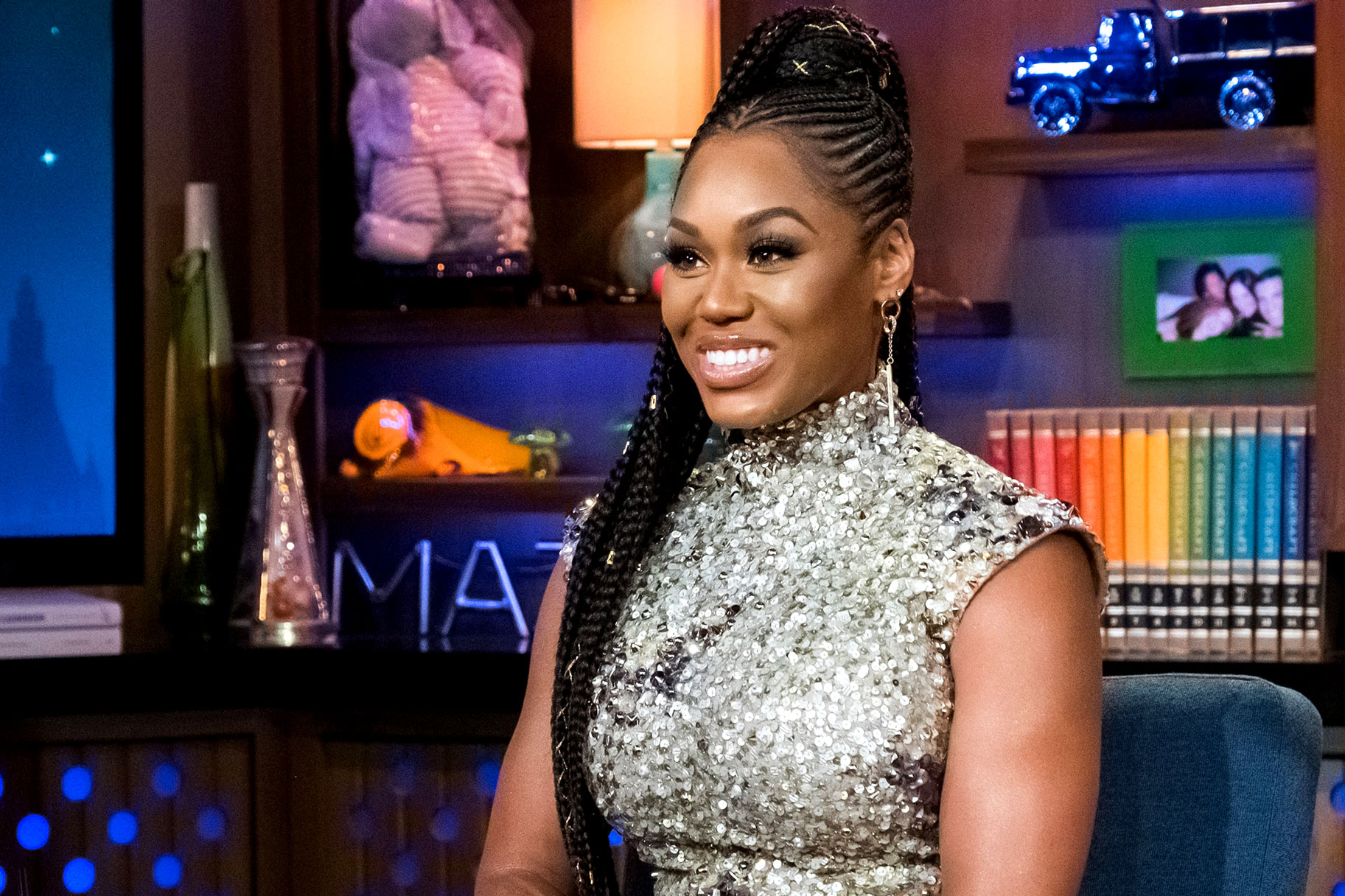 The new season of Real Housewives of Potomac is currently filming and there is already tons of drama. After it was reported that Monique Samuels physically dragged Candiace Dillard, some of the ladies have alienated the mom blogger!

As the other franchises sizzled down and received lackluster reviews from viewers, RHOP found itself rising as the new supreme. Between the spats among the Grand Dame Karen Huger and Miss Word On the Street Gizelle Bryant to the beauty queens Candiace Dillard and Ashley Darby going head to head — the episodes are not to be missed.

Recently it was reported that the ladies were filming at a vineyard when Candiace and Monique got into it. Multiple reports claim that the mother of three delivered on her last season promise to drag Dillard.

🗣SECURITY‼ Word On The Street is that The Green Eyed Bandit, Gizelle Bryant, showed up with her own security detail to filming today with the ladies. The entire cast, except for Candiace, met today and "the dragging" was the 🔥topic. A few of the ladies continued to express their "concerns" for their safety after Monique's alleged "blackout" that resulted in the dragging of castmate Candiace Bassett. While Ashley Darby, Karen Huger, and newbie Dr. Wendy Osefo are said to be #teammonique, the other ladies, not so much (yikes 😳). Stay tuned as the drama continues to unfold. Season 5 of RHOP is scheduled to return Spring of 2020. #theblacksocialites #RHOP #moniquesamuels #gizellebryant #Bravotv #PotomacsFinest #dmvsocialites #dmvinfluencers @mrsmoniquesamuels @gizellebryant

The violent event has allegedly made Monique an outcast to some of the ladies. Allegedly, there are a few co-stars who are worried about their safety.

A blog that reports on the RHOP going-ons shared a photo of Samuels along with a caption that read: ‘So I heard the RHOP Season 5 Cast Photoshoot yesterday was a MESS…. Allegedly a few of the ladies have “concerns” and are “reluctant” to want to film with Monique now due to the severity of the fight between she and Candiace. All 7 Wives did show up to the shoot yesterday, however the treatment that Mo received during the shoot from some of the ladies has her seriously reconsidering her future with RHOP.’

The drama doesn’t stop there. After the cast photo was shot the same page reported that Gizelle showed up with security to filming the next day.

‘Word On The Street is that The Green Eyed Bandit, Gizelle Bryant, showed up with her own security detail to filming today with the ladies. The entire cast, except for Candiace, met today and “the dragging” was the 🔥topic. A few of the ladies continued to express their “concerns” for their safety after Monique’s alleged “blackout” that resulted in the dragging of castmate Candiace Bassett. While Ashley Darby, Karen Huger, and newbie Dr. Wendy Osefo are said to be #teammonique, the other ladies, not so much (yikes 😳). Stay tuned as the drama continues to unfold. Season 5 of RHOP is scheduled to return Spring of 2020.’

Do you think that Monique is a danger to those around her?

They all need to grow up. Monique has children. Great example of restraint, Mo. Ms. Candice you need to get some impulse control or you will continue to get yourself beat. What won’t these ladies do for Bravo. Andy Cohen don’t give a damn about how any of these ladies are portrayed. I just hope the check is worth your self respect. Karen and Gizelle worry about your own business and stop being messy and shady. New girl, I hope you don’t lower yourself to fit in with this madness. Lastly, Robin you keep showing all the ladies how to conduct ones self. You give the show some much needed class.

Team Monque all the way! Candiace needs to worry about making her husband a real restaurant owner not a general manager with those so they can put some $ in that household instead of it going out for child support. That’s why she’s mad really cause Ashley”s man is got a bag for their baby and she does not. Lol

Giselle showing up with security is so fake and she is trying to be 1st Lady again, she’s so jealous and messy

Monique is s classy woman. Not a threat to anyone. If she did put hands on Candace it was instigated by Candace and her smart evil mouth. I think anyone blaming her is jealous of her anyway. Gizelle need to have several seats. If Monique leave the show I will no longer watch

I look at it this way, Robin looks more mannish then all of the women, Gizelle has a nasty mouth and sneaky, and Ashley is sneaky , foolish and is missing depth of perception. She totally missed her husbands homosexual behavior.
I like Monique, she is telling those chicks do not come her way. They are not afraid of Monique. That is an act. Listen to how Gizelle speaks “ghetto”. Robin, too.

Unless there are umpteen other new cast members that have not been announced, the only cast members left who are not listed in the article as #teammonique, are Gizelle, Robin and obviously Candiace. Gizelle has never liked Monque, Robin swings whichever direction Gizelle does, and Candiace just got her zz whupped.
So where is the story? You have 7 cast members. Three of then support Monique, two never liked her and one is on the other side of the fight. What has changed?
Gizelle bringing security is just another demonstration of her desperation to make someone else’s business HER storyline because she never has one of her own that doesn’t make her look like an aging mean girl who stayed too long at the party after everyone else was chosen and went home.

Candice was waiving a butter knife in Ashley face. And Monique is dangerous? I don’t think so! #TEAM MONIQUE#ALL DAY

Team monique. What candiace did was assault…monique defended herself. Someone throws a drink in simeone face…that is not a symbol of friendship….Candice was asking for it…if monique ends up going…Candice should too…with all of her knife wielding.

I don’t condone fighting BUT,Candiace has been asking for it. She is always running her mouth and people can only take so much. Monique warned her. #TeamMonique

I was not crazy abt Monique but she is growing on me. She has shown to be a str8 shooter. Candiace is an over grown brat. She’s a narcissist and has no talent. Maybe if she gets a job she can learn how to be productive! She’s exhausting as hell!

No Monique is not a danger throw water or wine in anybody’s face is throwing a punch! Gizelle is jealous. She is trying to used that for her none storyline. #TeamMonique

Think Candiace got what she asked for.Monique NOT pregnant now so she showed her .She would drag her.Maybe by the high ponytail. Pulled Candiace off her high horse.
Don’t think the other ladies have anything to worry about.Unless they step out of pocket to her.Like Candiace has been pushing.
Girl you newly married .Just talk to your husband like that.