Real Housewives of Atlanta star Kenya Moore has apparently had enough of haters claiming she was faking her pregnancy and decided to take to Instagram this week to share an ultrasound video just days after debuting a baby bump.

“My heart is overwhelmed by all the kindness and well wishes many of you have sent our family,” wrote the 49-year-old. “I felt compelled to share this video of one of our early ultrasounds when I saw my baby’s heart beating for the first time. I cried like a baby myself!”

On the season ten RHOA reunion, Moore announced her pregnancy, but many fans – and some co-stars – remained skeptical. As Page Six reports, this would be the first child for Moore and her husband Marc Daly, who she secretly married last summer.

The former beauty queen wrote on the ultrasound video that she couldn’t believe “this miracle” is growing inside of her and its heart is beating “so fast.” She also said that it was too early to tell if she was having a boy or a girl.

Moore did reveal that her doctor flubbed by saying “Barbie” instead of “baby,” but the gender is still unknown. The reality star hasn’t yet made her due date public but has said that she and her husband will welcome their newborn later this year.

Thank you #TeamTwirl you are so thoughtful! These are too cute! #babydaly #kenyamoore ??

In her first baby bump pic, Moore was positively glowing while she posed with one hand on her shoulder and the other on her hip. She wore a form-fitting red and white striped dress and clear high heels. On that picture, she added the caption, “Won’t he do it?” and the hashtag #GodsWill.

The pic was from her recent appearance at the Georgia World Congress Center where she gave the keynote address at the Atlanta Ultimate Women’s Expo.

When she announced her pregnancy on the RHOA reunion back in April, she said that she didn’t want to talk about the details because she was still nervous and wanted to get past a safe place. But, she will definitely have a boy or a girl later in the year.

Meanwhile, rumors have swirled that RHOA producers will not be asking Moore back as a full-time housewife for season 11, but she could stay on as a friend of the show.

According to insiders, execs were not happy that Kenya Moore chose to keep cameras away from her destination wedding, and since then Marc Daly has not appeared on the show. 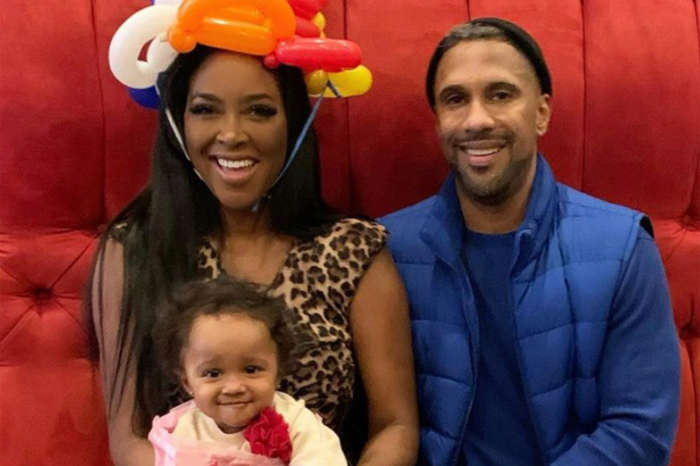