Reginae Carter's Ex, YFN Lucci, Caught On Video Doing Extreme Things With Other Women After Their Breakup As Some Blame Her Dad, Lil Wayne, For Creating The Culture Responsible For The Cucumber Challenge

YFN Lucci, 28, is living his best life days after getting in trouble with his on-and-off girlfriend, Reginae Carter. The 20-year-old daughter of hip-hop music legend Lil Wayne and reality TV star Toya Wright got angry because her now-ex-boyfriend got too excited over a few ladies doing the Cucumber Challenge.

The new social media craze finds young women simulating oral sex in viral videos. It has divided people online with some going as far as claiming it is degrading for women to do this. Defenders of the challenge say it is just young people having fun.

Either way, Lucci does not seem too worried about the split because he was seen in the club enjoying himself in the company of a few beautiful ladies. Reginae appears to be a distant memory by the looks of things.

Commenters on social media are having a field day at his expense. One of them stated: "This def shouldn’t have been recorded. It doesn’t look right on so many levels. White girls, black guys, hands around her throat smh. I can only imagine how the night went on."

A second person chimed in with: "This video giving me anxiety. Why is his friend choking her? Why is Becky wiping her mouth and flicking it? Why is Becky also mouthing the word “n*gga”? It's just a lot going on."

A third follower added: "The gag is Reginae’s dad helped promote a culture of men who don’t even like women who look like his own daughter 🤷🏾‍♀️ ...Chris Brown ain’t by himself with the prejudice aka “preference." 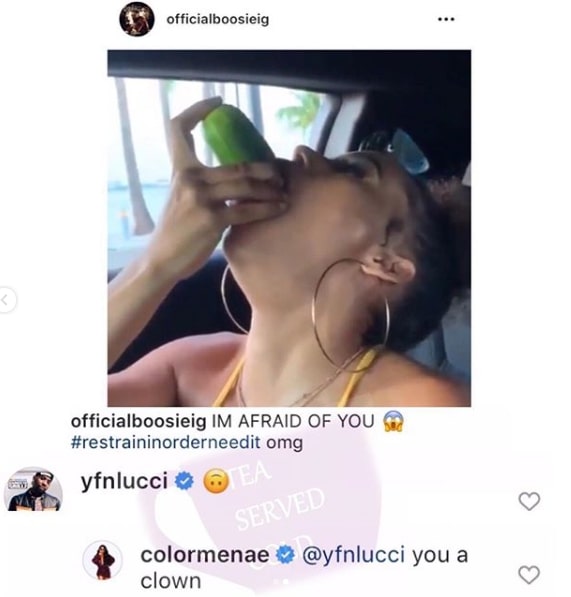 A few weeks ago, Lucci opened up about how he felt powerless watching Reginae get influenced by people on Instagram when it came to their relationship. He pointed out: "I be trying to let her know man, you can't let Instagram and all them people dictate our relationship. They gon' give their opinions, but you don't even know these people. How you just gon' take their word for it?. I got girl fans. So a girl can write her and say 'That's my man,' and she'll believe it, and then she'll send it to me, and I'll be like, 'Who the hell is this? This a random person.' You just gotta be strong, and talk and work it out."

Social media is at the same time a gift and a curse, and it seems that Lucci is aware of that. He was still not able to convince Reginae that he could avoid its trappings.