Amid all of the terrible accusations against her father, R. Kelly, Buku Abi is speaking up and it looks like she doesn’t have anything to say in his defense, but she is not really accusing him either! The estranged daughter took to her Instagram Stories to share a lengthy message about Kelly’s scandal and the role she wants to have in it.

‘I just want you to understand that devastated is an understatement for all that I feel currently. I do apologize if my silence to all that's happening comes off as careless. I pray for the families and women who've been affected by my father's actions,’ Buku wrote.

She went on to make it very clear that it has been really difficult to process the whole situation and even harder to gather the right words that can properly express how she feels.

Buku reminded her followers that she and her dad have no relationship and noted that she is not speaking on his behalf.

Furthermore, she mentioned that she hates having her personal life in the spotlight, however, ‘I feel like things are starting to get out of hand.’

‘My mother, my siblings and I would never support or be a part of ANYTHING negative he's done and or continues to do in his life. Going through all that I have gone through in my life, I'd never want anyone to feel the pain I've felt,’ she added in part. 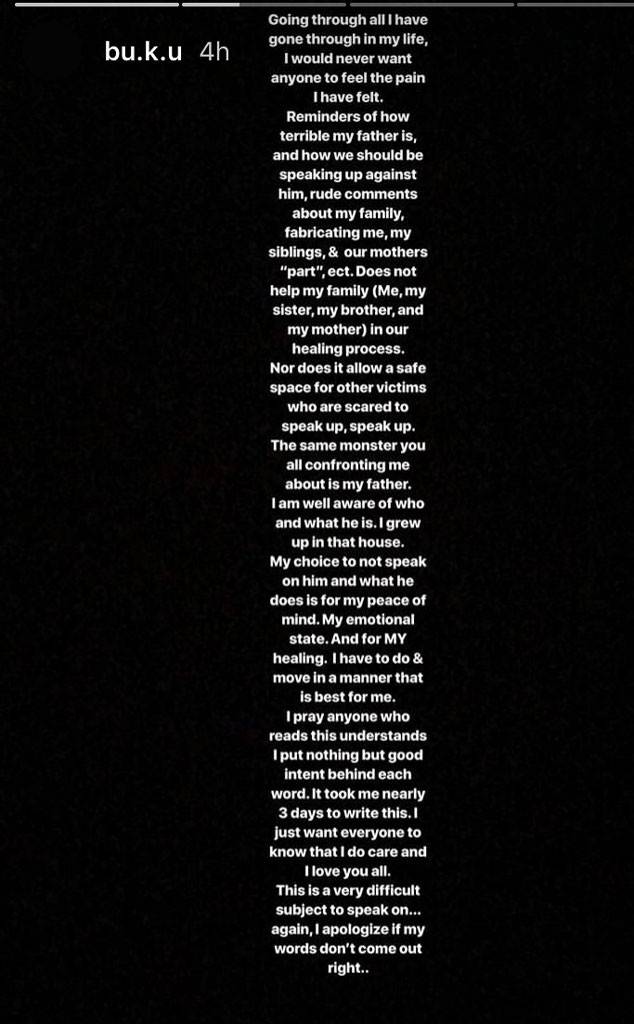 Buku then argued that all the speculations that her family was involved in any way or the constant requests to speak out about her father’s scandal are not doing anyone any good – be it her loved ones or the victims who are not in a 'safe space' to open up about what happened to them.

‘The same monster you all confronting me about is my father,’ R. Kelly’s daughter wrote before asking people to understand that the choice to not speak out on him is for her ‘healing,’ ‘emotional state’ and ‘peace of mind!’

Drea Kelly Reacts To The Latest News About R. Kelly

Erica Mena Drops A Message For All Parents Out There

T.I. Praises Xscape And Shares Emotional Story About Meeting The Love Of His Life