R. Kelly Just Told His Ex-Wife She Should Be Working At A Fast Food Joint To Take Care Of Their Kids 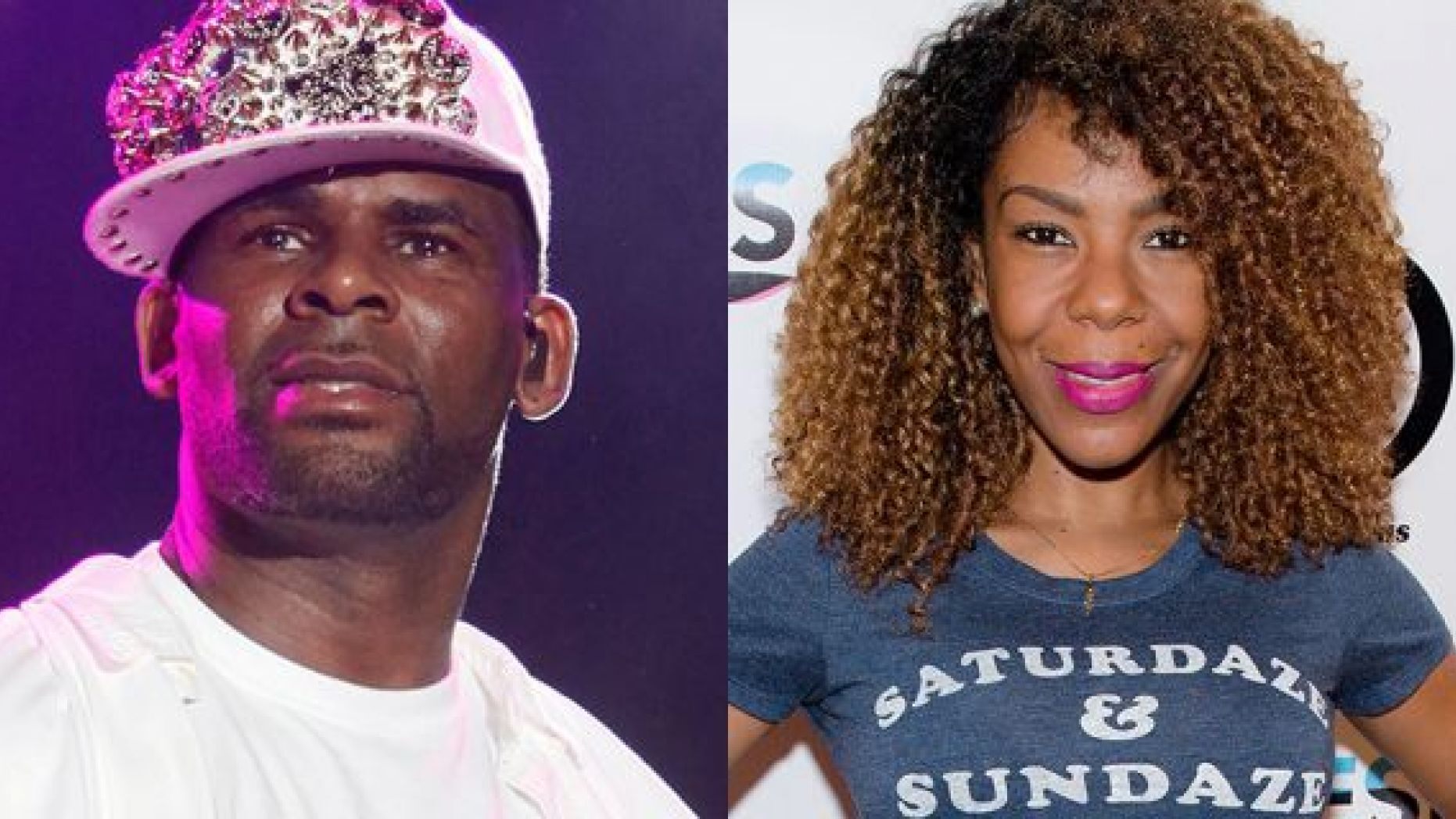 Everyone knows that R. Kelly is facing some serious time in jail for some crimes that he’s allegedly committed a while ago. As you probably know by now, the accusations against the man are terrible, and they involve sex tapes with underage girls.

The scandal involving Kelly was massive, and a lot of people came forward to talk about the whole drama. More details have recently surfaced about his case.

On top of it all, he has also been attending court dates regarding his child support payments of which he owes thousands of dollars.

Hot New Hip Hop just reported that just the other day, his ex-wife Andrea Kelly has suggested that in order to support his kids, he should get a job at a restaurant or fast food, to make tacos.

The comment obviously triggered a harsh response from him because according to TMZ he clapped back by saying that she’s the one who should be getting a job at a fast food restaurant.

Drea spoke to TMZ, and she and her daughter Buku Abi had a few things to say.

‘I don’t care if you’re gonna become the first King of R&B to work at Del Taco,’ said Drea.

Buku has something more to add and said that she doesn’t ‘need’ his money but that it’s his responsibility to pay up until she turns 23 years old.

After these comments aired, the online magazine mentioned above reported that reps for R. Kelly reached out to TMZ and suggested that Drea is the one who should be getting a job at a fast food joint where she should flip burgers.

He also believes that she has been using the child support money to fund her own lifestyle. R. Kelly also thinks that she should get a job if she wants to keep living big.

Oh please! @ Christina, you directed you as judge and jury. Life in prison, you sound as a hateful person. He alone is not to blame for these allegations, what about the parents who pushed their children in a relationship with the man. They wanted fame and money for their families, they took his money until there was no more to get. Know the facts before you run your mouth. Lies! So many lies have been told since all these allegations came to light. Wake up…

I really feel in my mind and spirit that’s not call for, digging Mr R.Kell in a big mess like this I do agree about the comment someone step up to the plate ,but in my understanding it’s a shame many people have done the same thing and got away with it. you no may God bless him.

I’m am so tired of people knocking R.Kelly for things that he allegedly did and I’m looking at it like this if these girls parents thought he was so bad why would they bring their so innocent daughters around Kelly if they thought he was such a bad person. I feel as tho they were using Kelly and when their daughters didn’t bring in no money from a singing career with Kelly now they want to bash him. I’m trying to figure out why they keep bring up those old cases that he has already beat, isn’t that double jeopardy. And just like another person commented on was the same way I feel and that was that they never ever bothered Hugh Hefner and all them under age girls he had and the killing part about it was he did it openly and nobody said one word. I feel like this I don’t know where the parents of the girls went wrong but in the last 2 generations their girls these were having more sex and more babies then they were having. In all honesty I have 2 daughters myself and if they were under age and they started to deal with older men in which they did prefer I would rather for them to mess with like somebody like Kelly who had money and maybe show them some of the finer things in life that I couldn’t afford I would feel a whole lot better then them coming to me with a man who not only was older then them but had nothing in this world to offer them and had no job no place to live but was just a straight up bum I couldn’t live with that. I know it’s not all about money but in dealing with Kelly I would feel like they would be better off, because as a parent I talk with my young ladies starting from their teens and even up to this day, they remind me of myself because I was 17 when I left home and was a virgin and started dealing with a man 12 years older then me and it was nothing that my mother could have told me about that man that at the time would make me dump him, I was fast just like these girls were that they trying to say that R.Kelly raped and if they gave consent to having sex with him to me it’s a rap I don’t care if they were under age and the way they are trying to label R. Kelly it shouldn’t be classified as rape but statutory rape and that was just because they were under age and then too you don’t know how old those girls told him they was. So take a word from the wise and that is if you want to monitor your daughters every move because you can’t watch them 24 24 then when they leave the house make sure you buy a chasity belt and put on them and you ain’t got to worry about them giving it up to nobody, CHOW.

I am so glad that someone else see this as I do, there is more to this, then we all know.

What does anyone on this blog know about abuse? Some of you all look misinformed, appear uneducated and ignorant. Yes I believe people are about money however it’s has been established that money is not the underlying motive for all of these women! Be careful what you say and defend without FACTS! What I mean by facts true unsubstantiated, hardcore data. (raise your hand if you know R KELLY ON A PERSONAL INTIMATE LEVEL.)…… if not shut up and Just sit back and wait for the truth to come out!

Yes Leslie! Finally, someone I agree with 100%. Just one thing, the word you mean is substantiated!

The funny things to all this is we can see his wrong but skip the parents who placed there children in a position to get money. The executives who funded. Why is it our crimes are so massive? Hugh Hefner creates a billion dollar business off this very thing openly and some of you same finger pointers have a playboy magazine stashed somewhere. Elvis Presley married an underaged girl. If Andrea Kelly don’t like her ex-husband why is she wearing the hell out his name when she has a new married name. If you go to the extreme then band groupies because that’s there purpose. Wake up people. You have an ignorant man in the dark house who was caught on tape saying the privileges of money yet he’s the president. R Kelly and Bill Cosby locked up Bret Kavaigh is a Supreme Court judge what’s wrong with this picture?

What I don’t understand Is theses women must of had some curiosity to be with R Kelly even though they knew what he is about…! But still went there and took part in what ever he was doing and they liked it or they would of run… to save there life and not looked back . Also reported it straight away.. but today everyone is pointing the finger on one person and not for one reason thinking maybe the women also encouraged him . He alone is not to blame, there are a lot of confused women aswell. Who like to be noticed . Who are capable to do anything. Even if they degrade themselves. Just like they are coming forward now why did they not speak up before and if they linked up with him to make music why were they having sex with him.?????? It’s all a big mess.

Thank god some body said what I was saying it was about the money the mother’s. Was not getting the money anymore and now R Kelly can’t give them what they was getting to me nobody is looking at the mother’s of these women they knew I say yes it may have been a set up

You can pass judgement on the “alleged allegations,” when the 12 people on the jury say what is the truth. Who made you the authority on everything. Always some religious person or persons passing judgement before the facts are out. Only thing out is “alleged allegations.” People are so quick to point the finger, when there are three pointing back at you.

Lol omg R. Kelly he has nerve. The truth is finally bringing justice that should of happen years ago.. Thanks to our justice system that has failed before .. It’s sad he actually thought he was that good and smooth to think he was above all because what he was famous and has money.. Sick pedophile are all kinds of people not just one kind of sick person.. He’s a serial rapist / everything else who doesn’t deserve to be a part of society. He will never change. I pray for the Max sentence with life in prison. Its about time he pays for his pain and disgust as a man.