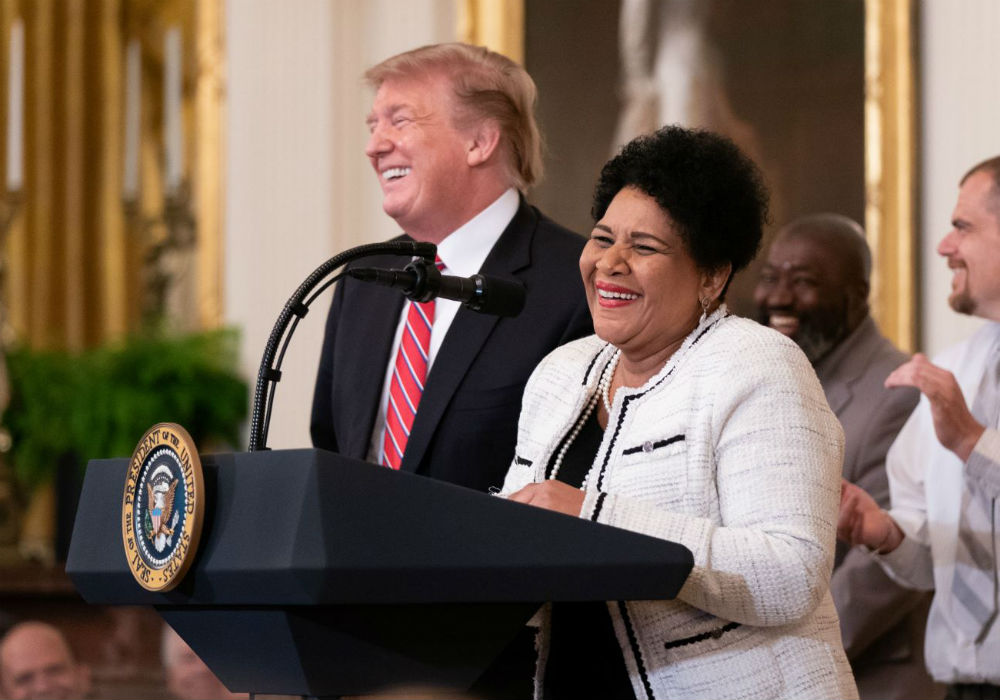 President Donald Trump is facing some backlash after he aired a campaign commercial during Super Bowl LIV that featured Alice Marie Johnson, a woman who was serving life in prison for a first-time non-violent drug offense. President Trump commuted Johnson’s sentence in 2018 after she served 21 years in federal prison, thanks to help from Kim Kardashian West.

The commercial featured Johnson speaking to reporters after she was released from Federal Correctional Institution, Aliceville in Alabama, and she thanked the POTUS for her freedom.

Two Super Bowls ago I was sitting in a prison cell.

Today I am a free woman and my story was featured in a Super Bowl Ad.

I will spend the rest of my life fighting for the wrongly and unjustly convicted!

“Alice Johnson was sentenced to serve life in prison for a nonviolent drug offense,” read the commercial. “Thanks to President Trump people like Alice are getting a second chance. Politicians talk about criminal justice reform. President Trump got it done. Thousands of families are being reunited.”

Johnson posted the commercial on Twitter, and she wrote in the caption that two Super Bowls ago she was sitting in a prison cell. But today, she is a free woman and her story was featured in a Super Bowl commercial. The 64-year-old said she would spend the rest of her life fighting for the wrongly and unjustly convicted.

President Trump also tweeted the video with a promise to restore hope in America, including the “least among us.” He added, “Together, let’s KEEP AMERICA GREAT!”

Even though she wasn’t mentioned in the commercial, Kardashian also posted the video and wrote that she was proud of Johnson. But, fans weren’t happy that Trump left out the Keeping Up With the Kardashians star because she worked so hard on Johnson’s behalf.

“Find a way to get to Kim Kardashian. I’m very serious about that.” Most Trump clemency grants bypass DOJ and go to well-connected offenders. @bethreinhard and me https://t.co/fJ4SFUP1H0

Fans criticized Trump for taking all of the credit for something that Kardashian was a big part of. One admitted that the POTUS did have the final say, but Johnson wouldn’t have been released from prison if it wasn’t for Kardashian.

Others weren’t happy that President Trump was using Johnson’s story in a campaign ad. Media Matters editor Parker Molloy tweeted that clemency for Johnson was “good,” but Trump using that clemency in a Super Bowl ad in an attempt to get re-elected was “tacky AF.”

More criticism came from voters who were unhappy about the commercial’s claim that Trump is reuniting thousands of families when his immigration policy has separated numerous families at the border.

@KimKardashian specifically said she went to the Obama administration and he wouldnt even acknowledge her. They went to Trump and her and Kanye were invited to the White House to discuss further. If he wasnt an open president it never would have happened.

While Donald Trump’s critics make strong points, they failed to mention that the POTUS signed the First Step Act along with commuting Johnson’s sentence. The new law was a bi-partisan effort to improve criminal justice outcomes and reduce the size of the federal prison population.

As for Kim Kardashian, she started working to free Johnson after discovering her case online. She eventually met with President Trump to discuss criminal justice reform, and Alice Johnson was released in June 2018.

“It became this mission that I just didn’t want to give up,” Kardashian told the Today show last year. “I think to some people it might seem like, ‘Okay, Kim made a phone call to the president.’“

Kardashian said that she hopes Johnson’s case inspires people to talk to those in power because they can have an effect over them for the greater good of others.