"That's hot!" is Paris Hilton's catchphrase. She said it throughout her multiple reality television shows and anyone who has ever watched Paris knows it's her way of paying a compliment. So is it really a form of over-sexualization when she said it to 15-year-old Millie Bobby Brown?

That's the question on everyone's mind after the Stranger Things actress shared several photos of herself wearing a spaghetti strap, leopard print mini-dress on Instagram with her 30 million followers.

Millie struck a sultry pose as she stood in front of a tropical backdrop of plants, jutted one hip to the side, and stared at the camera. She didn't smile for the shot and her flawless complexion was accentuated with just a hint of makeup in natural tones.

Though there was nothing overtly-sexual or inappropriate in the snap, some felt that her pose looked a bit old for the teen star. A second photo Millie shared on her Instagram account was also deemed too mature for a girl of 15.

Now people are wondering if Paris' comment is by some way over-sexualizing the teen star. Many people disagreed with Evan by saying that Paris says "That's hot" like other people say "That's good" or even "That's cool." They didn't find that Paris was actually saying Millie looked "hot" as in a sexual manner.

Still, there were many who agreed with Rachel Evan Wood who said using the word "hot" to describe a 15-year-old girl in any situation is uncalled for and inappropriate.

You may see the comments that Paris Hilton and Evan Rachel Wood left on Millie Bobby Brown's Instagram post below. 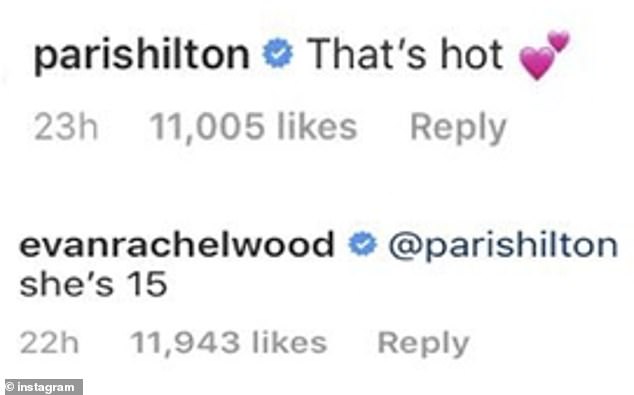 Millie Bobby Brown is at a transitionary stage where she is taking roles suited for a girl her age but is still growing up in front of the public eye.

Many agree that girls today grow up too fast and those who are in the Hollywood spotlight face additional pressures to grow up too quickly. What do you think? Who's comment do you agree with — Paris Hilton's or Evan Rachel Wood's?

Paris Hilton Addresses Those Pregnancy Reports - Is She Going To Be A Mom Soon?

Paris Hilton Opens Up About That Time She Came Home To An Intruder!

Khloe Kardashian's Fans Are In Love With Her New Look