Noah Cyrus And Lil Xan Back Together 1 Year After Really Messy Breakup - Check Out The Pic!

It’s been a year already since Noah Cyrus and Lil’ Xan put an end to their romance but the two were spotted in each other’s company again! Are they back together?

The singer and the rapper were caught on camera in his Mercedes G-Wagon yesterday, driving around L.A. and they seemed pretty friendly despite how things ended between them a year ago.

As fans remember, the young celebs ended things after Lil’ Xan accused Miley Cyrus’ baby sister of cheating on him.

Their breakup was just as explosive as their short-lived but hot romance.

Noah and Xan seemed really in love at the time but it all came crashing down really fast and their split was just filled with drama.

However, after they were seen driving together in his car, people are wondering what that means for their messy split – are they really giving each other another chance?

After all, what other reason would they have to hang out given how messy their breakup was? It would definitely be very hard for them to stay friends in the aftermath of all that happened between them publicly.

A reconciliation, on the other hand, is another story!

The pic shows Noah in the passenger seat while the rapper drives his car, both musicians looking pretty comfortable and happy to be around one another.

Noah had her hair down casually during their ride, while Lil’ Xan was wearing a red beanie. 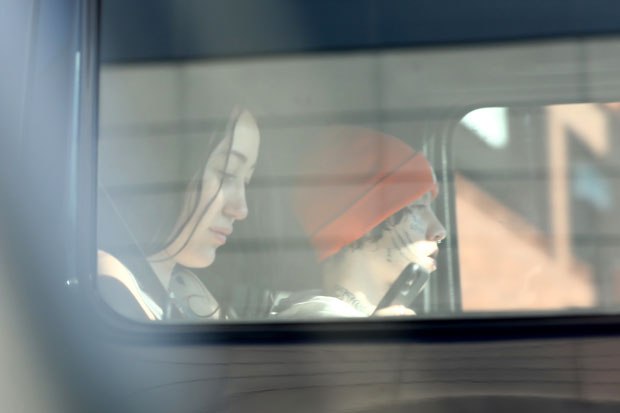 Given how things ended previously, it’s surprising they are back together but that really seems to be the case.

At the time, Noah was really upset about her boyfriend’s cheating accusations.

She defended herself on IG Live even cried on camera about it.

‘I’ll try to explain it more in the next couple of days. I never did anything that I am getting accused of. Get away from every f**king person that goes into your life and crushes it and just crumbles it and makes you feel like a piece of f**king s**t,’ she advised her female followers.

It turns out that she could not follow her own advice in the end!

Demi Lovato And Noah Cyrus Dating Exclusively? - They Reportedly Have A Strong 'Creative And Spiritual Bond'

Jordyn Woods Shows Off A Gorgeous Look In Vegas

Porsha Williams Is Grateful For Her Followers - Check Out Her Message