Natalie Suleman, formerly known as Nadya and by the alias Octomom, is sharing her life with her 14 children on social media. For the most part, she has dropped out of the public eye, after finishing her degree and legally changing her name. Her octuplets (six boys, two girls) are now eight years old, and things seem to be going much better for her than they did when the public lashed out at her for having 12 embryos implanted in her uterus via in vitro fertilization. The public unleashed their fury against Suleman because they believed a single, unemployed mother wouldn’t be able to support all 14 children without public assistance. The octuplets were born on January 26, 2009.

Though things seem more stable for Natalie, there’s no question that it’s been an uphill battle. After her story went viral, the public vilified her and she feared losing custody of her children. When she ultimately did receive public assistance, she also received death threats.

‘I had to kill Octomom to save myself’: Natalie Suleman’s new life —> https://t.co/EncVDQLbw7 pic.twitter.com/2BWCfwXelb

Her eight children have grown substantially since the world tried to glimpse them as newborns.

In 2012, Suleman did go on welfare and the response from the public was ugly. Suleman began receiving so many death threats that several security companies reached out to offer their services free of charge.

Natalie Suleman recently celebrated Thanksgiving with her children and shared photos and videos on her official Instagram page.

And last but not least to finish the race…#LittleJonah #NeverGiveUp ?#IsJonahYourHouseAndYourTheSnail ?

Suleman is a raw vegan and very health conscious. You can see many workout videos on her Instagram where she details previous back injury and how she suffered several broken ribs due to being pregnant with eight children simultaneously.

She has undergone several cosmetic procedures to help restore balance to her body but devotes a lot of time and energy to her family’s health.

She celebrated Thanksgiving with her octuplets at a turkey trot, where the kids participated in physical activity themed games. Suleman didn’t share photos of her six teenagers on Instagram.

What do you think of Natalie Suleman’s photos and videos? Do you think she and the kids should be back in the public spotlight? Would you watch a reality program with Natalie and her children? 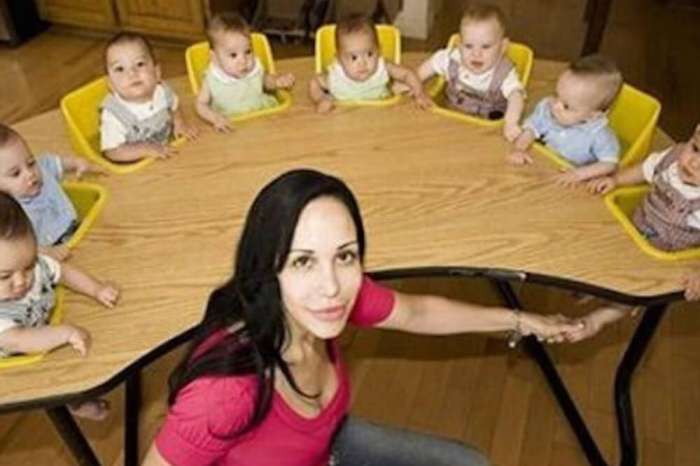 Several years ago she plead guilty to welfare fraud and was ordered to do 200 hours of community service. Several weeks ago her lawyer went to court and got her community service forgiven because she is physically unable to fulfill it. Look at her with her son riding on her back, how exactly can she do that but not take care of her community service? And who paid for her lawyer, we did. Who pays her rent and health care and food, we do. She goes to the gym and hangs out by the pool and shops at Whole Foods, nice life for someone with 14 kids and no real job.

I’m so glad that she is not giving up on her kids as well as herself.