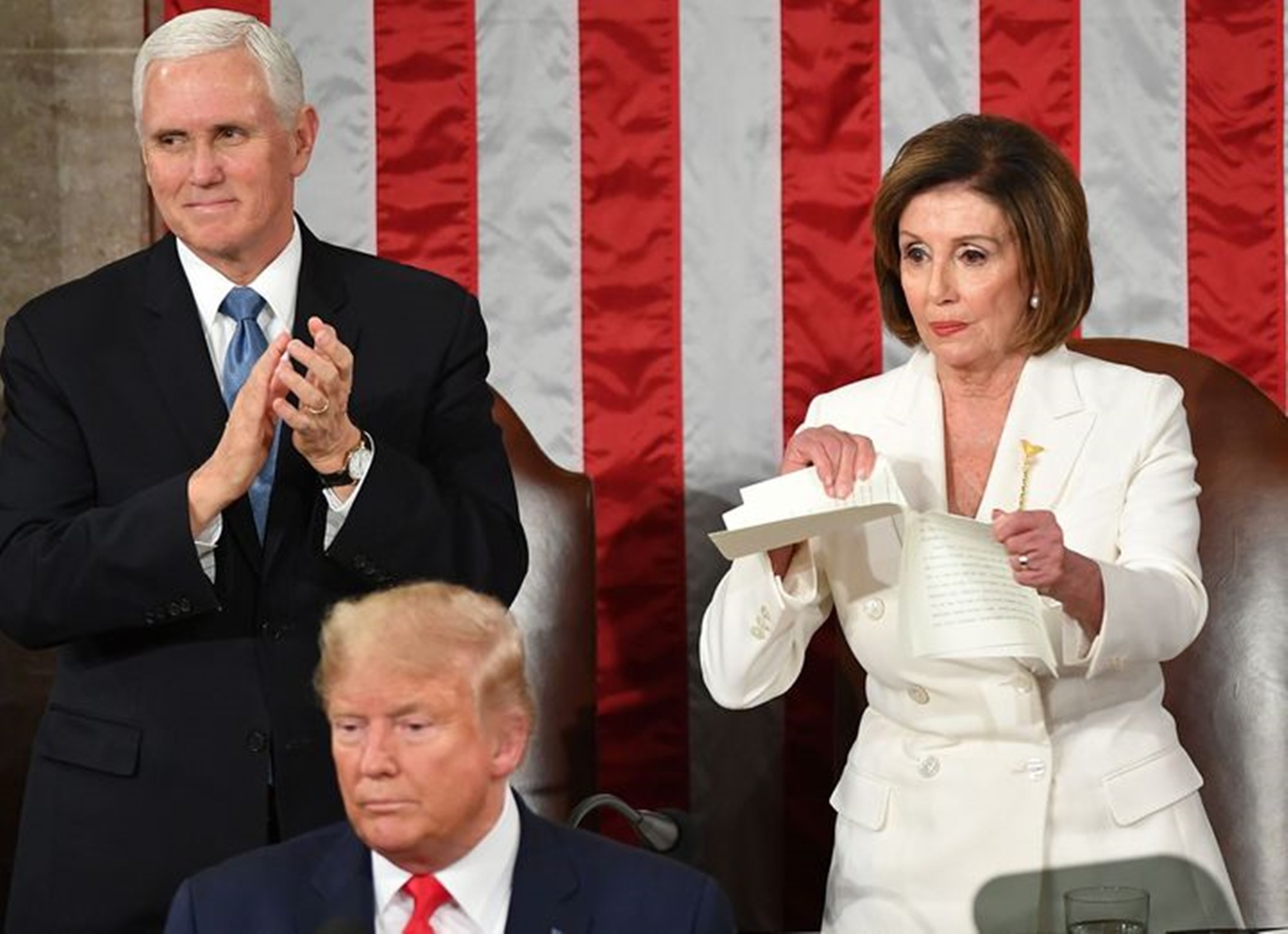 Donald Trump, the former reality TV icon, turned the State of the Union into a massive reality show, and House Speaker Nancy Pelosi found a way to steal the show from the entertainment star.

Pelosi went viral by ripping up Trump’s speech and walking off. The dramatic moment took place after Trump snubbed her by refusing to shake her hand at the beginning of the political event.

The veteran politician decided to retaliate by dramatically tearing a copy of the speech and then toss the pages behind Trump’s back, who was embracing his standing ovation.

The California politician was asked about the move, and she said this: “It was the courteous thing to do, considering the alternatives.”

During the speech, Trump said this: “Three years ago, we launched the great American comeback. Tonight, I stand before you to share the incredible results. Jobs are booming, incomes are soaring, poverty is plummeting, crime is falling, confidence is surging, and our country is thriving and highly respected again! America’s enemies are on the run, America’s fortunes are on the rise, and America’s future is blazing bright.
The years of economic decay are over. The days of our country being used, taken advantage of, and even scorned by other nations are long behind us. Gone too are the broken promises, jobless recoveries, tired platitudes, and constant excuses for the depletion of American wealth, power, and prestige.”

He added: “In just three short years, we have shattered the mentality of American decline, and we have rejected the downsizing of America’s destiny. We are moving forward at a pace that was unimaginable just a short time ago, and we are never going back!”

Repost from @realdlhughley … much respect to Nancy Pelosi. She did what we all wanted to do! #istandwithnancypelosi #respect #nancypelosi #rippingupspeech

He went on to say: “I am thrilled to report to you tonight that our economy is the best it has ever been. Our military is completely rebuilt, with its power being unmatched anywhere in the world — and it is not even close. Our borders are secure. Our families are flourishing. Our values are renewed. Our pride is restored. And for all these reasons, I say to the people of our great country, and to the Members of Congress before me: The State of our Union is stronger than ever before!”

A person had this reaction: “And it’s the only thing people will remember about the entire night 😂 that’s the best part.”

This voter wrote: “And all of you going to criticize him after now shaking her hand? She did what needed to be done! 😂”

Some in the media are blasting Pelosi for getting in the mud with Trump.

Ray J's Wife, Princess Love Norwood, Gets Support From Phaedra Parks After She Is Criticized For Sharing This Photo Of Her Post-Baby Body