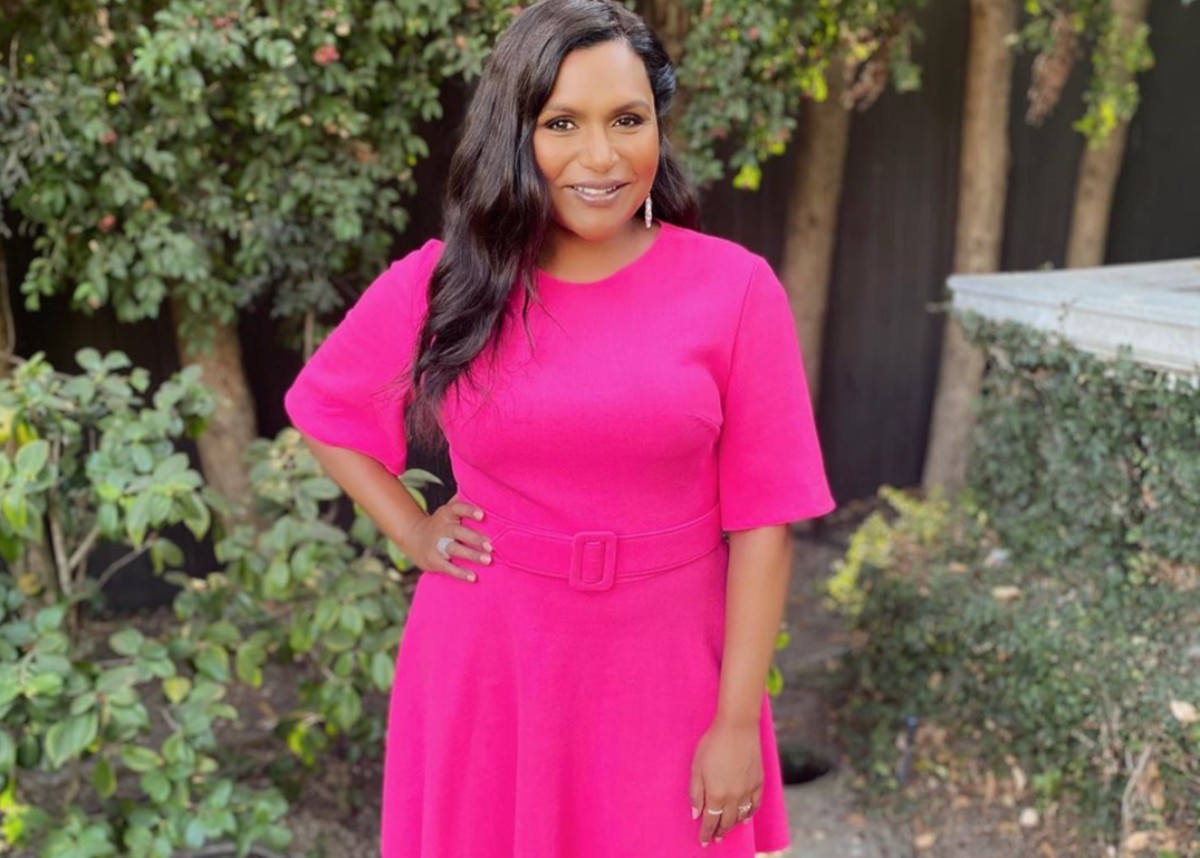 Mindy Kaling looks sensational in a hot pink Oscar de la Renta dress that she wore when she appeared on the Late Show with Stephen Colbert. Called the Drape Front Mini Belted dress, Mindy looked stunning in the outfit and shared a photo of herself wearing the garment on her official Instagram account. Mindy wore the dress when she made the public announcement that she had secretly given birth to her second child in September — a baby boy named Spencer.

The dress has an asymmetrical hem, is belted, and has loose-fitting, elbow-length sleeves. In the photo that you may see below, Mindy posed outside in her yard while wearing the gorgeous dress. She wore her long, dark hair swept to one side and opted for a light-colored lipstick. She kept her accessories to a minimum and wore long, dangling earrings with the outfit.

For shoes, Mindy opted for Christian Louboutin and wore a pair of So Kate heels in the color white. Mindy looked fabulous and teased her fans by saying she had some big news to drop on the show, and boy did she ever!

No one had an inkling that Mindy Kaling was pregnant throughout the Coronavirus pandemic, or that she had given birth in September! Mindy has been posting faithfully on her social media accounts, continued to give updates about her life to her fans, but never mentioned that she was pregnant or had given birth.

Here is the caption that Mindy shared with her 5.6 million followers before she dropped the bomb that she had secretly given birth to her second child.

This is proof for when you catch me on @colbertlateshow tonight that I’m wearing pants. Join me as I talk to Stephen about my @amazon essay collection, Nothing Like I Imagined, and drop some big news!

You may see the photo that Mindy posted below.

This is proof for when you catch me on @colbertlateshow tonight that I’m wearing pants. Join me as I talk to Stephen about my @amazon essay collection, Nothing Like I Imagined, and drop some big news!

If you missed Mindy’s stunning baby announcement you may watch it in the video player below.

Were you surprised that Mindy Kaling secretly had a baby? What do you think about her Oscar de la Renta dress and Christian Louboutin shoes? Do you like the look on her?