Marilyn Manson is being accused of child sex trafficking as demands the F.B.I. investigate mount. On February 1, 2021, Evan Rachel Wood publicly named Marilyn Manson as her abuser, prompting more victims to offer similar allegations against the 52-year-old. Game of Thrones actress Esme Bianco is the latest woman to share her story, and she alleges Marilyn Manson human trafficked her, as reported by Charisse Van Horn. Now, Massachusetts officials are calling for an investigation into multiple accounts of Marilyn Manson sex trafficking minors. The announcement comes as Florida officials are dealing with their own allegations of Manson sexually assaulting minors. No allegation involving sexual abuse or human trafficking of minors goes without investigation and Esme Bianco has already delivered her statement to the F.B.I. There are no specific details regarding the allegations publicly available and it’s a waiting game to see if Marilyn Manson will face charges.

Evan Rachel Wood shared a letter on her official Instagram account where Massachusetts Representative Natalie Higgins called on the F.B.I. and Department of Justice to investigate child sex trafficking allegations against the 52-year-old singer. Though details are unavailable, a situation that would fit a child sex trafficking charge could be if Marilyn Manson corresponded with minors then flew them out to attend his concerts, and engaged in sexual activity with them. At this point; however, nothing publicly explains why multiple states are calling for investigations into Manson for sex trafficking minors. Representative Natalie Higgins specifically stated in her letter that minors identified and named Brian Hugh Warner aka Marilyn Manson as their alleged abuser.

You may see Representative Higgins’ letter to the F.B.I. and the Department of Justice below. 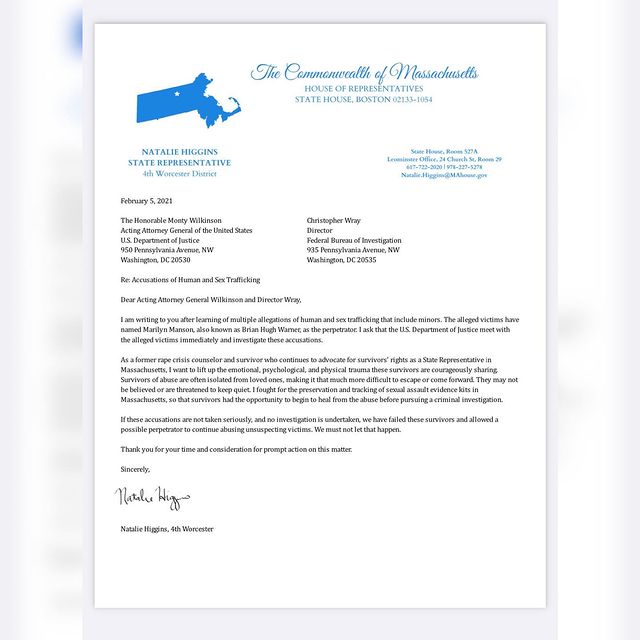 Marilyn Manson maintains his innocence and says he had consensual relationships with women. He has not addressed the recent allegations of child sex trafficking. 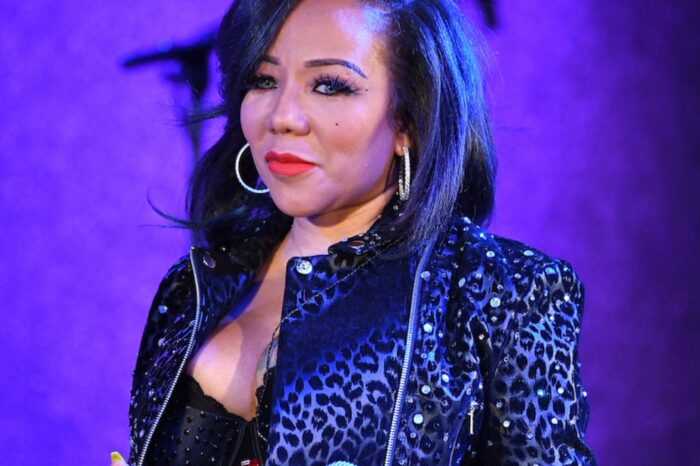 Tiny Harris Is Proud Of Her Smart Daughter, Heiress Harris - See The Clip She Posted

Evan and her little clique are ruining it for actual survivors.

We see through your lies Evan, you’re not that good of an actress.

Man hope it’s not true:( thought he was just a rocker weirdo! Seemed like a typical money hustling smear campaign to me until this.. that’s too much 🙁 If true give him what he deserves!

She was an adult who consensually got in a plane and flew there. She admitted to having a huge crush on him. I think trying to pull sex trafficking on Esme behalf is far fetched.. once again she was a consenting ADULT who flew there, did indeed make the video he asked her to make. This is a stretch.

Read the official Q. Drops.
Qanon is a mainstream lie. It doesn’t exist. Read the supercomputer Q drops. U will realize what is going on.

I no he did he’s album is called smells like children?? He ain’t hidden it.

He is just like R Kelly.
He trawled Tumblr and MySpace and other sites looking for vulnerable kids.
I saw him in gothic clubs in Massachusetts with teenagers. He’s a criminal.

Man that sucks! Didn’t strike me as a chomo, thought he was just a freaky dude, call me crazy… He deserves what he gets if the worst is true, very sick 🤮