LeBron James Gets New Tattoo In Honor Of Kobe Bryant - Check It Out!

Gone but never forgotten! This is what LeBron James is trying to make sure happens when it comes to Kobe Bryant.

That being said, the basketball star got a tattoo as a tribute to the late legend.

The ink makes sure to commemorate Kobe via his nickname, Black Mamba.

It’s pretty clear that LeBron was one of the most affected people by the tragedy and when he found out that Kobe’s helicopter had crashed, leaving no survivors, he broke down in tears.

It was a devastating news and LeBron continues to mourn the loss of a friend and inspiration like no other!

So, he’s found a way that is sure to never let him forget just how much Kobe meant to him and millions of others.

The tattoo that is sure to honor the late basketball player is on his left thigh.

While it’s still healing and so it’s still wrapped with clear plastic tape, it appears to be a Black mamba, which just so happens to be Kobe’s nickname.

In case you are not aware, a Black mamba is a snake known for its incredible speed, just like Kobe, hence why he was called that.

Not only that, but under the snake image, there also appears to be written: ‘Kobe 4 Life.’

Again, however, it’s quite difficult to decipher it properly through the plastic. 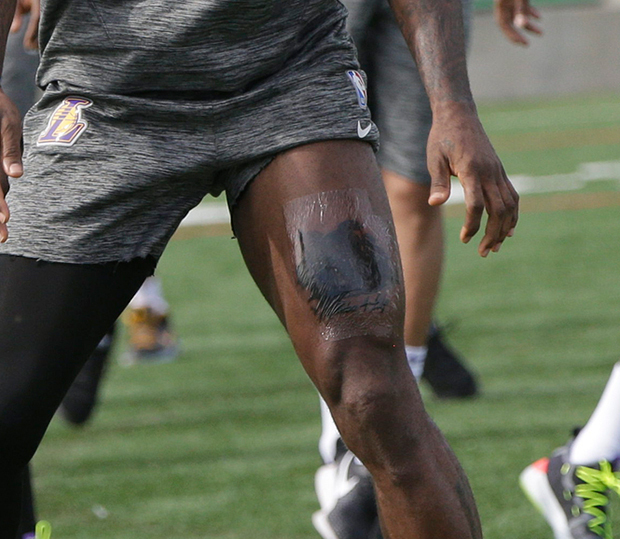 At the time when he was caught on camera sporting the new ink job, LeBron was working out with his fellow Lakers players at their El Segundo, CA training facility, earlier today!

These past few days have been really difficult for millions of fans and fellow celebrities who had been inspired by Kobe for so many years.

That being said, they have also filled social media with heartbreaking tributes to him following the helicopter crash that killed Kobe, his 13-year-old daughter Gianna and seven others.