The Real Housewives of New York City star took to her IG Stories to update fans on her updated looks! That’s right! Leah McSweeney has undergone plastic surgery and she proved that she has nothing to hide when it comes to her followers since she posted a post-op clip that showed her all bruised up and swollen after nose job.

This was also meant to clear up the rumors regarding her ‘black eyes’ as she says that fans have been sending her DMs regarding the bruises.

RHOC Season 14 Officially Underway! Who Is In And Who Is Out?

That being said, she made it very clear that she has absolutely nothing she wishes to hide and explained: ‘I got a rhinoplasty and a septoplasty. I couldn't be happier. I have been wanting one for so long and now I can also breathe, which is great.’ 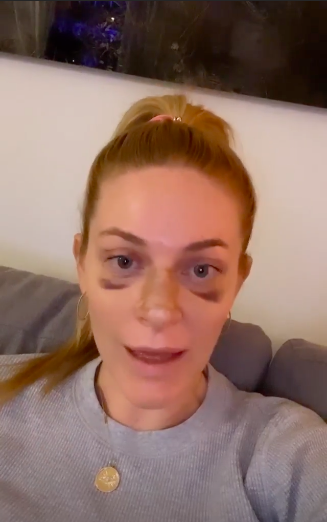 What this means is that the reality TV star went under the knife not just for aesthetics but also for medical purposes since a septoplasty is meant to straighten a deviated septum, making it much easier to breathe.

Nene Leakes Exposed For Leaking Note To Cynthia Bailey By B. Scott

The rhinoplasty, on the other hand, is strictly cosmetic and refers to changing the shape of someone’s nose.

She went on to stress that ‘I'm just never going to be one of those b****es that pretends like it's not work, it's contour because that's f***ing weird.’

In the meantime, she gave an interview via ET and discussed her very first season on the Bravo show and it sounds like she’s had a really positive experience so far.

‘It's been so nice and it's so great. I cannot imagine if, what if everybody hated me and they were harassing me on social media? I wouldn't be able to deal with that and the pandemic at the same time right now. I just would not be able to. God gives you what you can handle and I wouldn't be able to handle that anyway. It is so nice, it is nice to have support,’ she dished via video chat.