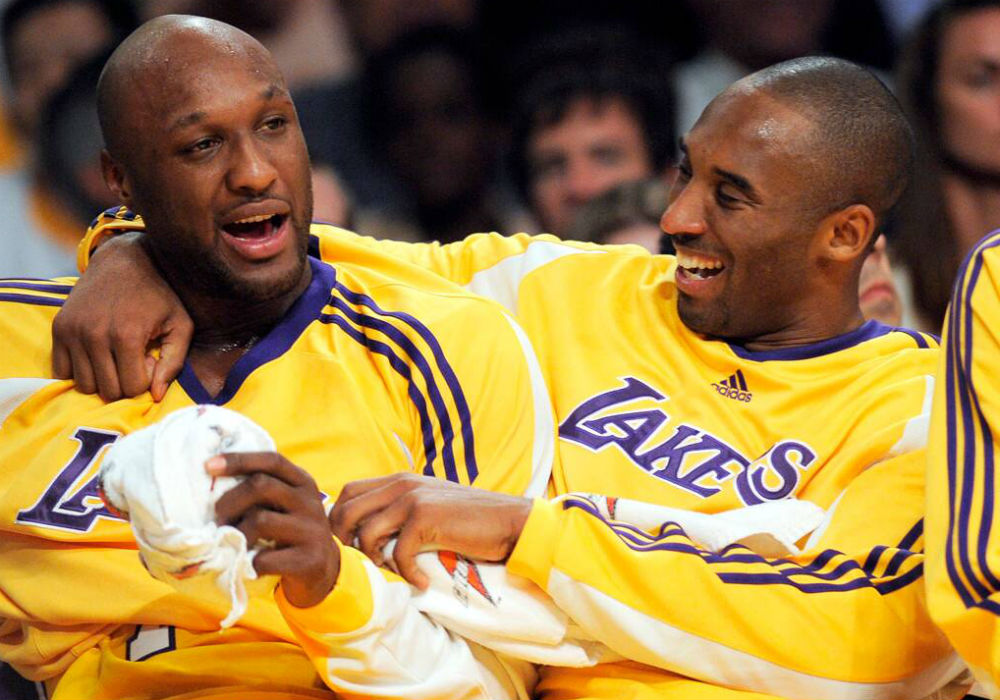 Former Keeping Up With the Kardashians star Lamar Odom is mourning the death of his close friend and Los Angeles Lakers teammate Kobe Bryant. The basketball player posted an emotional tribute to his “brother” on Instagram after the news broke that Bryant and his 13-year-old daughter Gianna were among the nine people who lost their lives in Sunday’s helicopter crash in Calabasas, California.

Odom posted a series of pics of himself with Bryant on the court during various Lakers games, and he wrote in the lengthy caption that the pictures were just the tip of the iceberg when it came to their relationship.

These picture are just the tip of the iceberg of our relationship. He taught me so many things in life that were necessary on and off the court. On the court he taught me how to carve out defenses and how to take my time. How to make winning my ultimate goal. Off the court he taught me to sign my own checks lol. Of course anyone who knows my story knows I’ve suffered a lot of loss but the only loss I can compare this to is when I lost my son. Even though our relationship wasn’t father/son, it was more like him being a teacher and me being his brother. I’m glad I got to be the ying to your yang as far as the locker room was concerned. It was my pleasure. I couldn’t even catch my breath today when I heard this news. I just knew if he was in a helicopter crash he would have been the one to survive. Somehow he would have jumped out and landed on his feet. I’m sitting here thinking about when we would be in practice scrimmaging and you would start the jump ball off with elbowing Sasha in the chest. Like dude it’s 10:30 in the morning lol. You think watching him play was crazy, you gotta think in practice if you scored like 8-9 buckets throughout the practice you had a great practice. I’ve seen him knock off 13-14 in a row in practice!!!! I’m still waiting for the media to come out and say wrong report. No way God took my brother this early. I know I been through my own stuff in life with using drugs and not being good to myself. When I went through that Coma situation if God would have came to me and said we would take me and spare Kobe I would have rather that happened. In honor of my brother I’m up at 4am tomorrow to get to the gym! Gigi gone give you buckets!!!! I love you brother 💔🙏🏿😥 @kobebryant

Odom said that Bryant taught him so many things in life that were necessary both on and off the court. He explained that when it came to basketball, Bryant taught him how to carve out defenses, how to take his time, and how to make winning his ultimate goal.

Khloe Kardashian’s ex said that off the court, Bryant taught him how to sign checks, and he described their relationship as Bryant being the teacher and Odom being his brother.

Odom also talked about the loss of his six-month-old son Jayden – who died in 2006 from sudden infant death syndrome. Odom explained that he suffered a lot of loss in his life, but the only thing that compares to the loss of Bryant is the loss of his son.

“I’m glad I got to be the ying to your yang as far as the locker room was concerned. It was my pleasure,” wrote Odom. “I couldn’t even catch my breath today when I heard this news. I just knew if he was in a helicopter crash he would have been the one to survive. Somehow he would have jumped out and landed on his feet.”

The former NBA player reminisced about his practices with Bryant during their seven seasons on the Lakers together, and then he wrote that he was still waiting for the media to say the report was wrong.

“No way God took my brother this early,” wrote Odom.

The Darkness to Light author admitted that he’s been through his own stuff in life, and that included drug use and not being good to himself. He said that if God would have come to him during his coma situation, he would have gladly allowed God to take him instead of Bryant.

Lamar Odom says that in honor of his brother, he will be up at 4 a.m. everyday so he could get to the gym and put in the work to be great. He wrapped up his post by writing, “I love you brother,” and then on Monday he added a second post to show off the work he’s putting in instead of “going crazy” somewhere.