Michael Costello came for Kylie Jenner under a post where she displayed her 23rd birthday look. Lala Kent took the opportunity to call him out for allegedly refusing to dress her because she isn't famous enough.

Costello slammed Kylie's photo where she shouted out highly sought after designer Olivier Rousteing for her celebratory dress. He feels that she only acknowledges the super popular designers on social media.

The Project Runway star wrote: 'Thank you Oliver [sic] for the perfect bday dress. And thank you to the no name designers who work tirelessly around the clock on custom looks who she won’t tag , mention or @ . . . Unless it’s paid. And thank you to the glam team who always gets tagged no matter what. (this post has nothing to do with me as Kylie only wears something from me once a year and I’m lucky if I get a decent pic to post. No shade to any of her team who styles her and no shame to the glam team . Even though we know you can not wait to unfollow me and drag me for filth!' 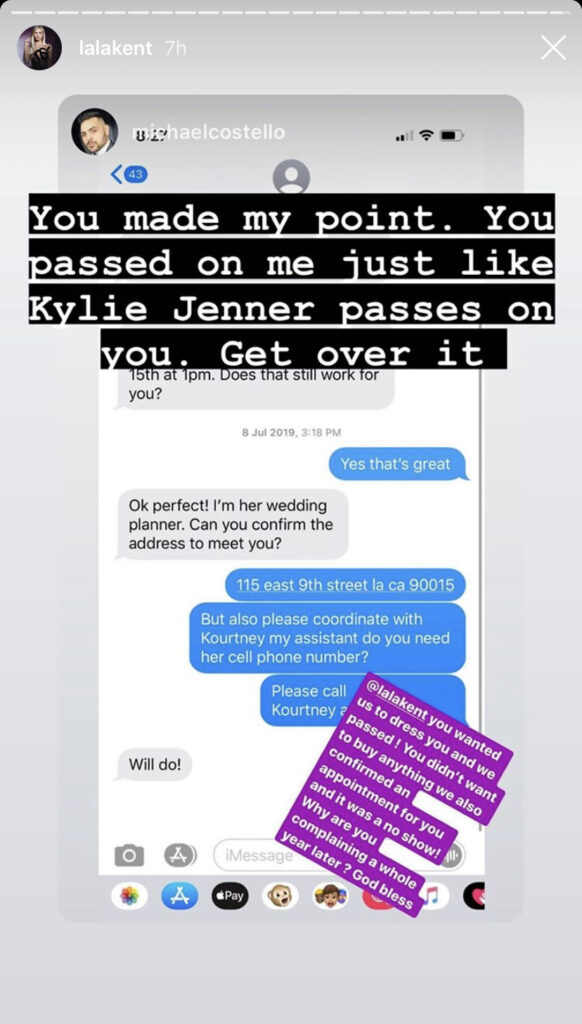 Lala saw this comment and felt that Michael was being hypocritical because she claims he snubbed her when she asked him to make her wedding dress.

The Vanderpump Rules star took to her Instagram Story where she exposed Costello for snubbing her.

'I trolled Kylie’s gram and found this. What a clown. This dude. I literally blew him up to make my custom wedding dress-he would have gotten all the ‘tags & @’s’ he’s talking about. But I never heard back from him… why? Because I’m not ‘big enough.’ So cool out, Costello-you do the same s***.'

Michael ended up clapping back with his own side of the story.

'You wanted us to dress you and we passed! You didn’t want to buy anything we also confirmed an appointment for you and it was a  no show! Why are you complaining a whole year later? God bless,' he wrote accompanied by a screenshot of a conversation with her wedding planner.

Kent said that the screenshot did nothing but confirm that he passed on her the same way Kylie did him.

Lala Kent Was Reportedly Involved In Scheana Shay's Fiancé's Proposal Plans - Here's How She Helped With The Process!

Donald Trump Says He Will Look Into Pardoning Edward Snowden