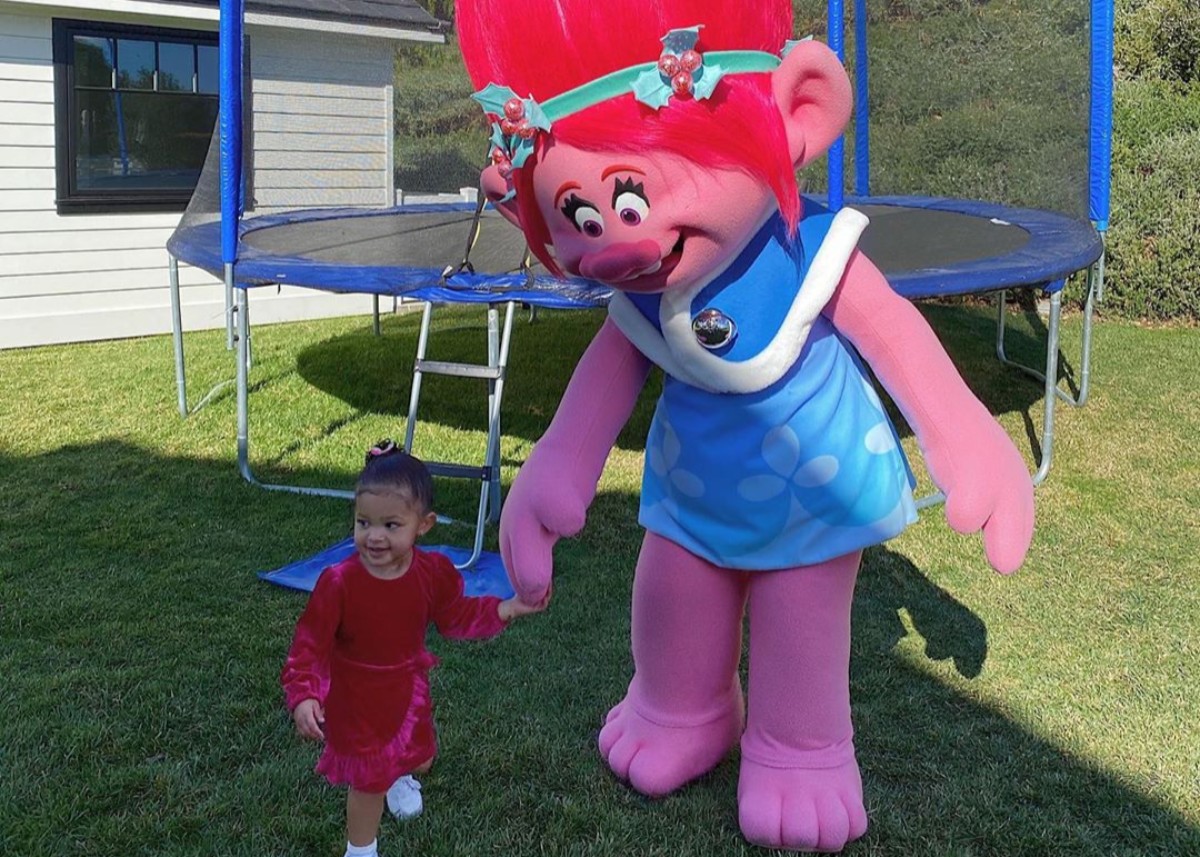 Stormi Webster loves Trolls and it seems this will be the theme of her epic birthday party that Kylie Jenner and Travis Scott are planning for the soon-to-be two-year-old. After throwing an incredible launch party for the Stormi x Kylie Cosmetics Collection last week that was mistakenly believed to be a birthday party, Kylie Jenner and Travis Scott are gearing up for Stormi’s actual birthday party. The couple chose to keep Stormi’s pregnancy a secret and didn’t even reveal that Kylie had given birth to a little girl until after she was born. Last year, Travis and Kylie threw a party that played off of his Astro World album called Stormi World and this year, reports say they are planning something even bigger.

Stormi is a huge fan of trolls and Kylie often shares a bit about Stormi’s love for the character on her social media accounts. Kylie has even shared photos and videos of Stormi playing with a troll life-sized character in her backyard! Now Kylie is sharing a glimpse at Stormi’s Troll-themed birthday cake and expressing her excitement for Stormi to wake up and see her surprise!

In the video player below, you may hear Kylie Jenner discuss Stormi’s cake that was made by Crumbles.

Crumbles also shared a photo of the cake where you can see the full details. Crumbles is known as “home to the cookie cake” and the decorations on this S-shaped pastry feast will certainly have Stormi delighted! Approximately eight Troll dolls adorn the cake that features rainbows, flowers, and candy swirls.

Crumbles captioned the photo with the following.

A special one made for Stormi who loves the Trolls! 💕

A special one made for Stormi who loves the Trolls! 💕

For Christmas, Travis Scott ensured that Stormi had a great time playing with Poppy from Trolls. You may see photos and videos that Kylie Jenner posted to her Instagram account, where she has 160.2 million followers. Stormi can be seen holding Poppy’s hand, running with Poppy chasing after her in the backyard and even dancing with the character.

What do you think of Stormi Webster’s Trolls’ birthday cake?

Are you looking forward to seeing what type of birthday party Kylie Jenner and Travis Scott have planned for their soon-to-be two-year-old daughter?