Kylie Jenner is a connoisseur or rare and expensive luxury cars. Now, her daughter Stormi Webster also kicked off her own collection of pint-size vehicles.

She posted a photo of two 'child-sized electric convertibles: a $400 red Ferrari and a $389 black Lamborghini covered in Louis Vuitton’s signature, a rainbow-hued monogram print,' the outlet writes. 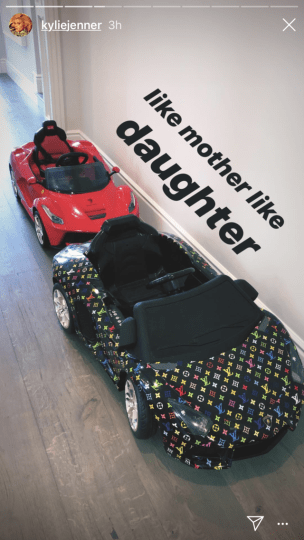 The rapper also bought Kylie a $1.4 million Ferrari LaFerrari as her push present, and a vintage Rolls Royce for her 21st birthday.

During the interview, Travis said that he is getting ready to propose to Kylie and make her his wife.

Travis is featured in  Rolling Stone  magazine where he opened up about his life with Kylie and their daughter .

Travis praised Kylie a lot during the interview, and among others, he said:

'People don’t understand how real my girl is. How ill she is. They have assumptions, bullshit-ass remarks of what they think is going on. She’s the coolest motherfucker of all time; it got to a point where I was like, ‘I need her with me to operate. She’s that one.'

We hope that this little family has the best Christmas.

What did Kylie Jenner name her two-month-old son

Doja Cat Impresses Fans When She Stops Performance To Help Someone