Kylie Jenner chose the most revealing image for new advertising for her own brand. Lavender line of cosmetics will go on sale on May 23 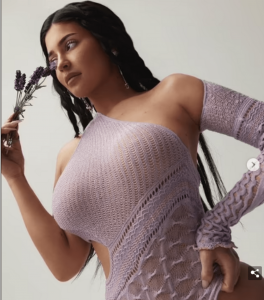 The social media star and one of the brightest representatives of the Kardashian-Jenner clan have published on social networks several pictures of the advertising campaign of the personalized beauty brand Kylie Skin. 24-year-old Kylie Jenner, who became a mother for the second time in February, poses for the camera in a translucent bodysuit in a delicate shade of lavender. The star's flawless skin hints to potential buyers that by purchasing the brand's cosmetics, they can count on a similar effect.

Kylie completed her shooting outfit with transparent shoes, white gold earrings with diamonds, and a sprig of Hidcote English lavender. According to a press release, the new Kylie Skin collection includes lavender-scented bath bombs, candles, bubble baths, lotion, and other paraphernalia for pleasant relaxation and pampering.

02.02.22 24-year-old star of the reality show The Kardashians Kylie Jenner and 30-year-old musician Travis Scott had a son. A few days after giving birth, Kylie admitted that her son was named Wolfe, and Jacques was selected as the middle name in honor of Travis's father. Later, the couple changed their mind, announcing that the name Wolfe categorically did not suit the baby and they would come up with another one, but there were clearly difficulties with the choice.

The Sun reported that the couple had finally made up their minds. Travis and Kylie named their son a very noble name - Knight (Knight) Jacques Webster. Knight in translation from English means "knight." The parents decided to leave the second, significant name for the rapper.

Kylie Jenner's Feelings About A Future With Travis Scott Have Changed -- Is Baby Number 2 Still In The Cards For Kim Kardashian's Sister?

Kylie Jenner met her ex-boyfriend at a party

Kendall Jenner has a maternal instinct