It’s not like Kylie Jenner needs any specific reason to turn her daughter Stormi into her own personal ‘mini-me,’ but she really does go above and beyond on special occasions. That being said, the family’s Christmas Eve party was the perfect place and time to dress the toddler in a tiny version of her dress, the two stealing the show in their matching fashion.

As you might have expected, the whole clan rocked really glamorous looks for the fancy party and Kylie was no exception.

The makeup mogul and her daughter stunned in Ralph and Russo emerald green silk dresses and posed for multiple pictures, making sure to document the special day.

Kylie’s gown had a thigh-high slit, putting her long legs on display, and also featured a big side bow.

The off the shoulder dress was also very flattering; clinging to the young mom’s every curve.

The look was made complete by her massive diamond and emerald necklace and green nails.

As for Stormi’s tiny version, it was made from the exact same material but was more appropriate for her age.

That being said, the dress had a flared skirt, cap sleeves as well as a sash.

In the caption, Kylie wrote: ‘Merry Christmas Eve. Most wonderful time of the year.’ 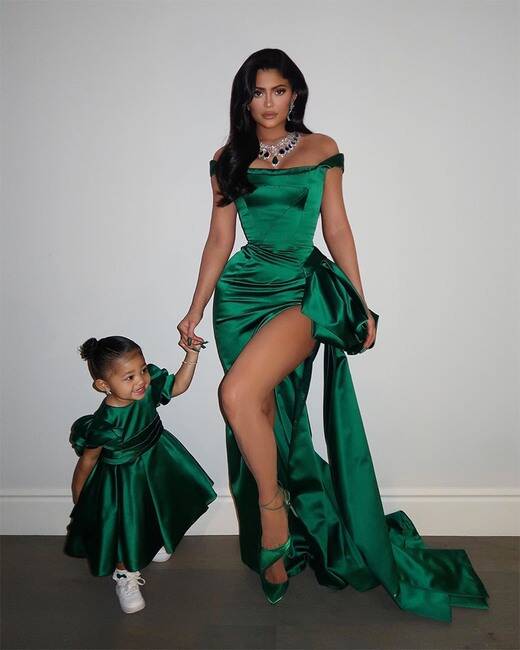 This year, the bash took place at Kourtney Kardashian’s house following Kim, who hosted it last year after many years of it being thrown by Kris Jenner only.

Speaking of the momager, she seemed to approve of the decorations at the entrance to Kourt’s home.

‘This is so beautiful!’ she can be heard exclaiming in a clip she posted on her platform.

The Kar-Jenners had quality entertainment as well, none other than Sia performing at the family gathering.

Kim and Khloe documented the private, Christmas-themed mini-concert on their IG stories.

Aside from the well-known star, they also had a group of carolers spreading Christmas cheer as they greeted the guests.

Joe Giudice And His Daughters Reunite In Italy To Spend Christmas Together - See The Sweet Clip!