Kourtney Kardashian Shares Bible Verse From 2 Chronicles In Response To Coronavirus — Does She Think God Is Punishing The World For Sin? 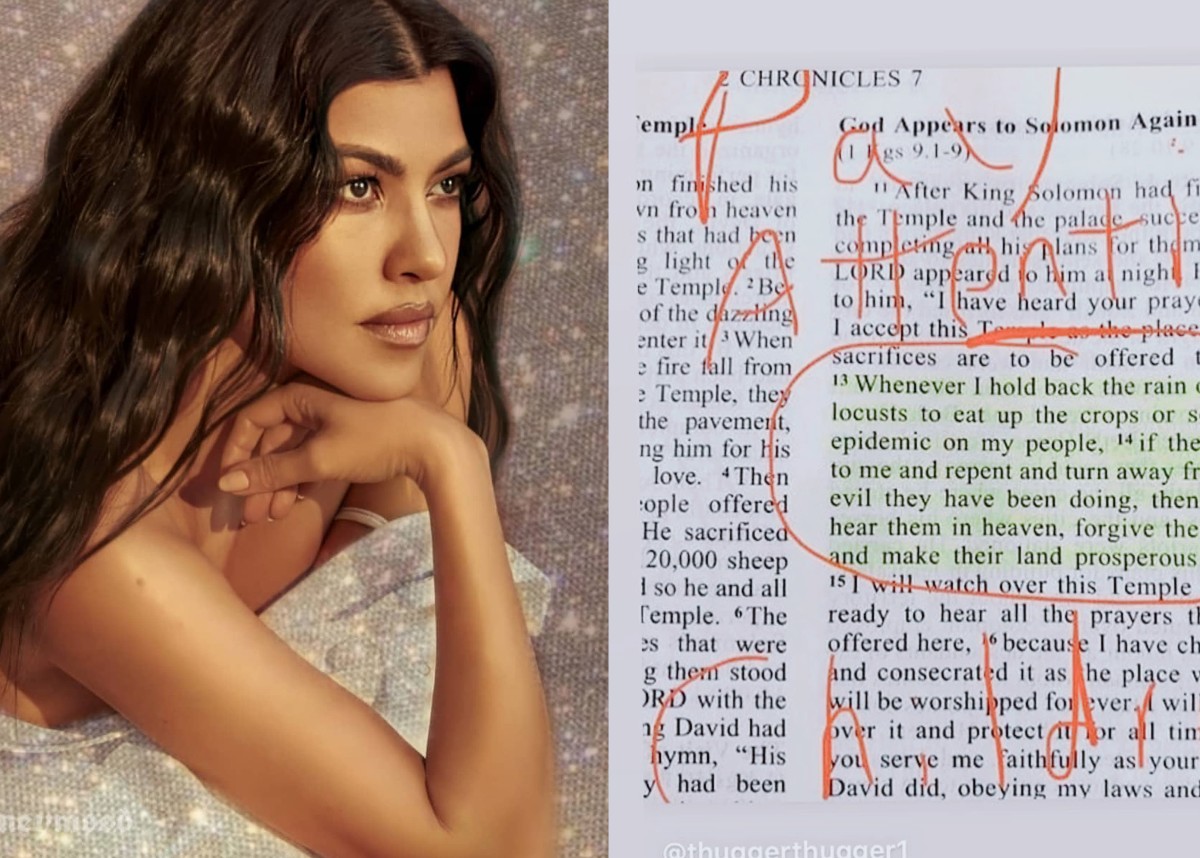 Kourtney Kardashian has sparked discussion and even debate after sharing a Bible passage from 2 Chronicles chapter 7 where she refers to God sending an epidemic on his people as a response to sin and their evil actions. Some have questioned if Kourtney is suggesting God sent the Coronavirus to kill people due to their sins. Kourtney didn’t highlight the passage and write the words “Pay Attention Children” on the passage as it was a repost from the Instagram account Young Thug, who is on the social media platform as ThuggerThugger1. Even though Young Thug originally shared the passage (it’s unclear if the handwriting is his or if he found it from someone else) Kourtney Kardashian is under fire for sharing it in her Instagram stories.

The passage has people upset as it refers to God punishing people for sin by sending epidemics, locusts, and drought.

The Bible verse states the following.

“Whenever I hold back the rain or send locusts to eat up the crops or send an epidemic on my people if they pray to me and repent and turn away from the evil they have been doing, then I will hear them in heaven, forgive their sins, and make their land prosperous again.”

People have been looking to alternative meanings for the Coronavirus pandemic. Some people noticed that author Dean Koontz seemed to predict the Coronavirus in his 1981 novel The Eyes Of Darkenss where he spoke about the Wuhan 400 virus that started in Wuhan, China.

Additionally, Kourtney shared an excerpt from Syliva Browne’s book End of Days: Predictions and Prophecies about the End of the World with her sisters and Kim shared it on her official Instagram account. The passage states the following.

“In around 2020 a severe pneumonia-like illness will spread throughout the globe, attacking the lungs and the bronchial tubes and resisting all known treatments. Almost more baffling than the illness itself will be the fact that it will suddenly vanish as quickly as it arrived, attack again ten years later, and then disappear completely.”

What do you think about Kourtney Kardashian’s post? Do you think that she was suggesting that the Coronavirus pandemic is a punishment from God?

All through the Bible we find where where God either allowed or sent plaques, famine, nature etc. to try to get the attention of the people who had turned their back on Him. God’s wrath is Judgement for sinning and not repenting and turning from our sinful ways. He just may be trying to get our attention! This country needs Jesus!

Yes it true it’s the word of God she is right it’s a wake up call people don’t understand God at all people please pray.

“Does she think?” Are you kidding me? Stop playing like it’s not obvious right now the times we are living in.

What’s wrong with people complaining
on what is written in the Bible?

“Hear no evil, see no evil and say no evil”?

It’s all over the Bible about sin and punishment from God.

Then the word of the LORD came to Jonah the second time, saying,
“Arise, go to Nin’eveh, that great city, and proclaim to it the message that I tell you.”

So Jonah arose and went to Nin’eveh, according to the word of the LORD.

Now Nineveh was an exceedingly great city, three days’ journey in breadth.
Jonah began to go into the city, going a day’s journey. And he cried, “Yet forty days, and Nin’eveh shall be overthrown!”

And the people of Nin’eveh believed God;
they proclaimed a fast, and put on sackcloth, from the greatest of them to the least of them.

Then tidings reached the king of Nin’eveh,
and he arose from his throne,
removed his robe,
and covered himself with sackcloth,
and sat in ashes.

And he made proclamation
and published through Nin’eveh,
“By the decree of the king and his nobles:
Let neither man nor beast,
herd nor flock, taste anything;
let them not feed, or drink water,
but let man and beast
be covered with sackcloth,
and let them cry mightily to God;
yes, let every one turn from his evil way
and from the violence which is in his hands.
Who knows, God may yet repent
and turn from his fierce anger,
so that we perish not?”

When God saw what they did,
how they turned from their evil way,
God repented of the evil
which he had said he would do to them;
and he did not do it.
(Jonah 3:1-10)

I personally think it’s a wake up call. Pay attention!!!

Ironically, this is the scripture that popped in my head last week when I prayed about this virus!😳🙄 This brings another confirmation