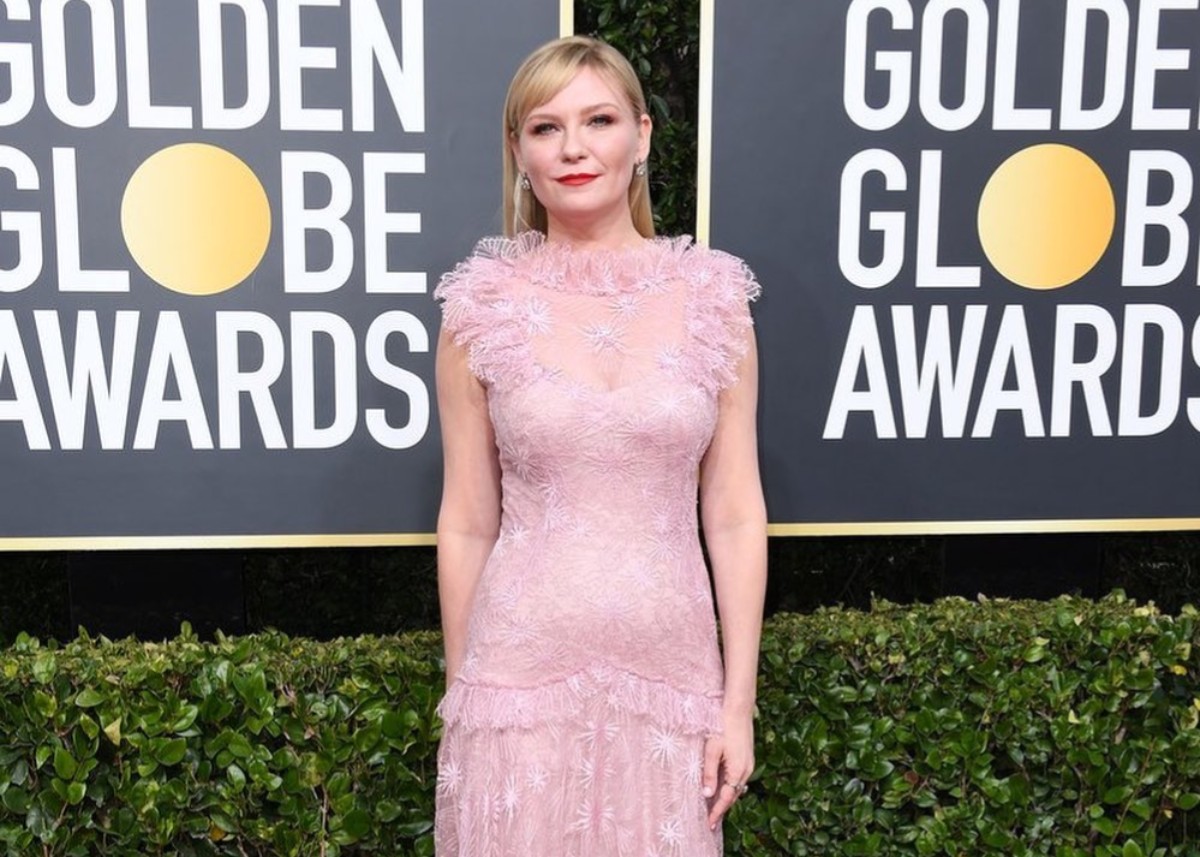 Kirsten Dunst looked gorgeous when she walked the Golden Globes red carpet with her husband Jesse Plemons. Wearing a beautiful pink Rodarte gown, Kirsten stunned as she shimmered in crystals and lace. The official Rodarte Instagram account shared photos of Kirsten and said the gown is officially called the Rodarte Pink Double Lace Gown. Kirsten is a 2020 Golden Globes nominee in the Best Actress in a Musical or Comedy Television Series for her role in On Becoming A God In Central Florida.

Kirsten met her husband Jesse when they worked together on the television series Fargo. The pair looked wonderful and Jesse wore a dark suit with a white shirt and tie.

Celebrity hairstylist Owen Gould did Kirsten’s hair and Mary Wiles did her makeup. Kirsten took a series of photos before she hit the red carpet including several close up shots of her hair and makeup as well as some full-length photos taken outside.

You may see the photo of Kirsten Dunst and Jesse Plemons that Rodarte shared with their one million Instagram followers below.

The custom Rodarte gown flowed in layers of exquisite pink lace and gently trailed against the red carpet. When Kirsten spoke to Ryan Seacrest she said that she picked out the lace while in her bed. She did an excellent choice as the pink dress was the perfect complement to her natural skin tone and beauty.

You may see a solo photo of Kirsten below.

Celebrity hairstylist Owen Gould shared several photos and you could see the beautiful color Kirsten had. Her hair was a lovely shade of blonde and she wore it brushed back over her shoulders with side-swept bangs that perfectly framed her face. Her hair showed off her gorgeous earrings.

You may see the close-up shot of Kirsten below.

Mary Wiles shared a behind-the-scenes photo of Kirsten getting her makeup done. Most striking was the vibrant, red lip she chose. Kirsten wore a beautiful, soft pink color on her eyelids that was the perfect addition to her dress.

What do you think of Kirsten Dunst’s red carpet look?

Are you rooting for Kirsten Dunst to win a Golden Globe?