Kim Kardashian has changed her hairstyle again and is in no hurry to return to her natural hair color.

Kim Kardashian candidly admitted that she is very worried about her hair because she thinks she will go bald after 10-hour bleaching (and all for the sake of entering the Met Gala 2022 red carpet ). Therefore, many decided that the star would stop experimenting with hairstyles for at least some time, but that was not the case. 41-year-old businesswoman ,  every time she appears in public and new posts on her personal account only stimulate a new wave of discussions about how the color or length of her hair has changed. 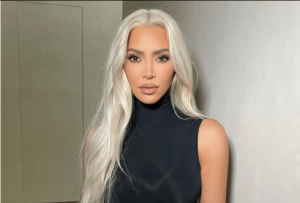 A couple of hours ago, Kim again shared with the followers a series of fresh pictures in which she looks simply amazing: in a black T-shirt, high-rise  j eans, and stocking boots. But fans noticed that compared to the photos of two days ago when the paparazzi filmed her walking with the children, the shade of Kardashian's hair became lighter, plus the length changed, and volume appeared. And this means that the reality star has dyed her hair again or started using a purple shampoo that removes yellow pigment and also made extensions. And everything would be fine because Pete Davidson's beloved in these photos is luxurious, but such manipulations with hair negatively affect their condition; the hair can really not stand it and start to   fall out. Therefore, fans are hoping that the star simply wore one of the wigs, of which she has a huge amount.

Megan Fox tried on Bangs, but everyone looked at the slits on her dress