Kevin Hunter is trying to get back into his wife's good graces as continued cheating rumors run rampant. The producer has gifted Wendy Williams with a $40,000 watch.

The Frank Muller timepiece was customized and purchased from Flawless Jewelry where sources say that he is a regular.

An insider told E! Online: "Kevin comes in and sees Eddie from Flawless for pretty much all of his jewelry needs. Kevin is a regular at the jewelry store, he's been a customer there for years and years. I don't know if he picked up anything else while he was at the shop." 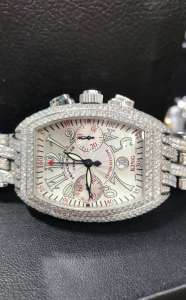 Hunter has also broken his silence to the online publication by claiming that he and Wendy are doing fine.

"We are focused on her health and sobriety, and that is it," he added.

This comes after reports claim that not only has Hunter stepped up his ongoing affair with Sharina Hunter but she also gave birth to a baby girl that is believed to be his.

Williams, who has opened up to her fans about her struggle with sobriety, is having a hard time with the news.

Merely a day after it was said that Sharina gave birth, Wendy allegedly checked out of her sober home and went on an alcohol-infused downward spiral where she was taken to a hospital and given fluid filled with vitamins to help a hangover.

She appeared in front of her studio audience looking just fine only a few hours after it all happened.

People in Wendy's inner circle say that Kevin Hunter is without a doubt the problem. He's rumored to be controlling and manipulative which makes Williams so hesitant to leave him for good.

The sources close to the situation feel as though in order for Wendy to become mentally and physically healthy -- she's got to give him the boot. Do you believe Hunter had a motive behind gifting the talk show host with this icy watch?

Wendy Williams Has Fans Excited With Multiple Offers She Received