Kandi Burruss shared more pics from the latest performances of the show Welcome to the Dungeon , and fans could not take their eyes off her chest.

The truth is that Kandi was flaunting a huge cleavage which showed a lot. The photo triggered an intense debate among fans in the comments section.

'Last night @donjuannc’s brother stopped by to catch @thedungeontour. Don’t they look like twins! Their daddies genes are strong!' Kandi captioned her post.

Tamar Braxton commented: 'This picture makes me want some milk.' 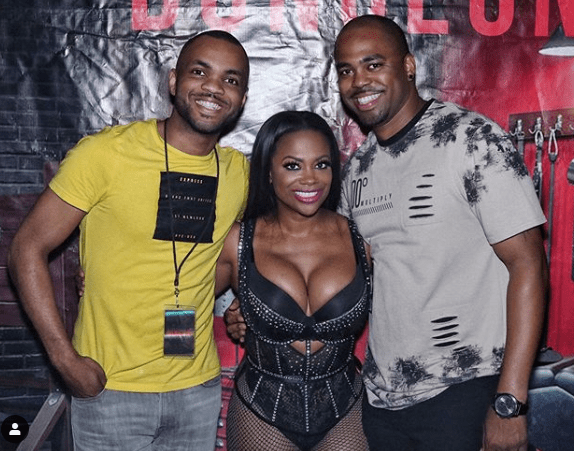 Another fan asked 'Kandi do you have implants? I just want to know are they heavy or does your back hurt.'

Someone responded: 'she actually does have implants she said that on RHOA before,' while another commenter said 'actually she didn’t she said she got them lifted after ace on the reunion from the last year.'

One other commenter said, '@tonidelynn maybe we watch different shows. She's said she had a breast lift; NOT implants. Y'all see why so many innocent folks in jail.'

Someone else explained, 'when u get them lifted they add implants to fill them out. Look at Botched on tv.'

One person wrote that 'just like they all wear wigs/weaves/extensions, they All have implants. They all have gotten liposuction. A few had a tummy tuck (Kandi is one). Sheree may be the only one without much work done on her body, then Kenya because they both work out a lot. We all know Kandi EATS! My question is this @kandi when are you gonna help the rest of us who love to eat like you do, and tell us exactly how you got so skinny? You admitted yourself that working out and going to the gym is not your thing. So give up the secret girl.'

Kandi might just have made some fans happy when she announced that the Dungeon show may be performed again and she might come up with more dates and locations .

Tamar Braxton Opens Up About Her Life Following Her Scary Suicide Attempt - Here's What Her New Focus Is!

Kandi Burruss Shared Some New Pics With The CHI Fans

Chris Brown's Message And Photos In Honor Of His Baby Girl Royalty's Fifth Birthday Have Fans In Awe - People Compare Chris' Post To The One Of Nia Guzman, RoRo's Mom

Eva Marcille's Photo Of Her Son Has Fans In Awe