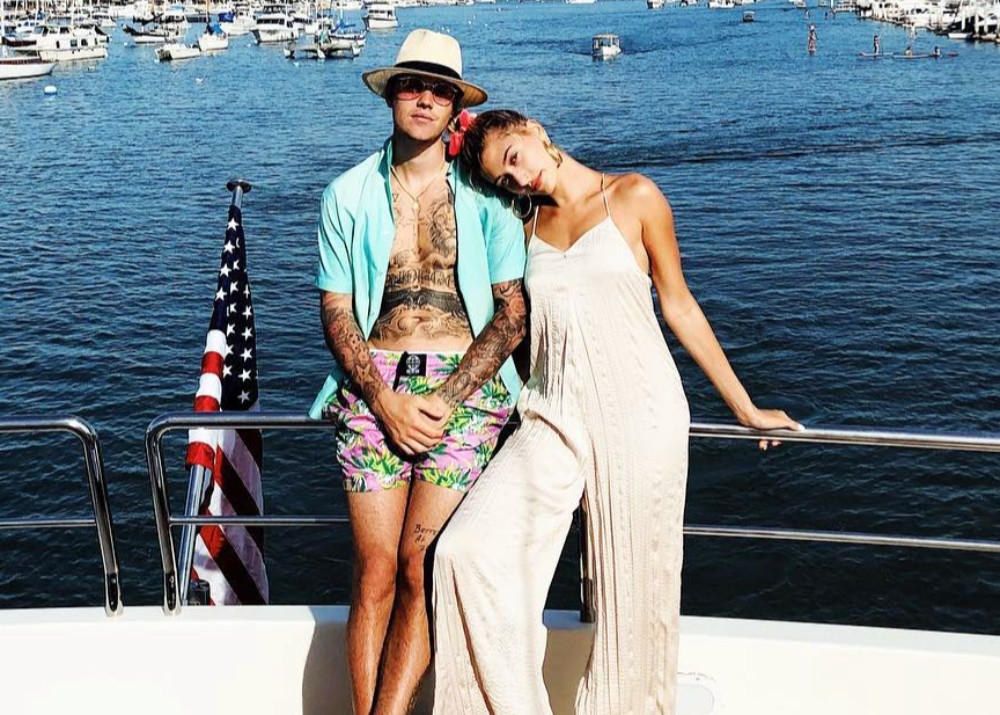 Justin Bieber and Hailey Baldwin are preparing for their second wedding and now photos from Sunday night are surfacing. The lovely couple was dressed in white as arrived by boat at South Carolina’s Moreland Landing, where they enjoyed a nice cocktail party with their close friends and family. Hailey looked gorgeous with her long blonde hair, pulled away from her face and secured with a half ponytail. She adorned the hairstyle with a white bow.

Hailey’s hair matched her nearly $1000 Jimmy Choo shoes that featured oversized, organza bows as well. Her off-shoulder mini dress was sleek and stunning on the 5’7″ model. Justin chose black pants and a white polo shirt with comfortable loafers. Photos of the couple arriving by boat to the wharf went viral.

While many are full of joy and excitement for the happy couple, there have been some social media posts on Monday showing zealous fans who were suffering emotional breakdowns due to the wedding. Maybe they hadn’t fully believed that Hailey and Justin tied the knot on September 13, 2018.

You may see a report by the Daily Mail including multiple photos of the happy couple below.

Justin Bieber keeps it casual in polo shirt and deck shoes while Hailey Baldwin ops for super short ivory gown as they arrive by speedboat for their South Carolina wedding rehearsal dinner https://t.co/hL089bcXSB

Additionally, E News! provided an inside look at the couple’s wedding rehearsal. You may see those details in the video below.

When video footage of Justin and Hailey arriving at the wharf surfaced, fans were surprised to see Justin standing up, in front of Hailey and dancing in front of her. It appeared as if he was serenading and dancing for his wife-to-be-again.

HollyScoop caught the video footage and shared it on Monday morning.

Though this is meant to be a small gathering, there will be plenty of celebrities in attendance. Hailey Baldwin-Bieber and Justin Bieber have been close friends with many celebrities who share similar faiths as the couple. These include the Kardashians and Jenners including Kendall and singer Katy Perry who will attend Justin’s and Hailey’s wedding.

The wedding will take place at Montage Palmetto Bluff that is a waterfront resort that spans approximately 20,000 acres. The photos captured by the Daily Mail show the couple looking extremely giddy and happy in love. What do you think about Justin Bieber and Hailey Baldwin-Bieber getting married in a religious service? Are you happy for them?