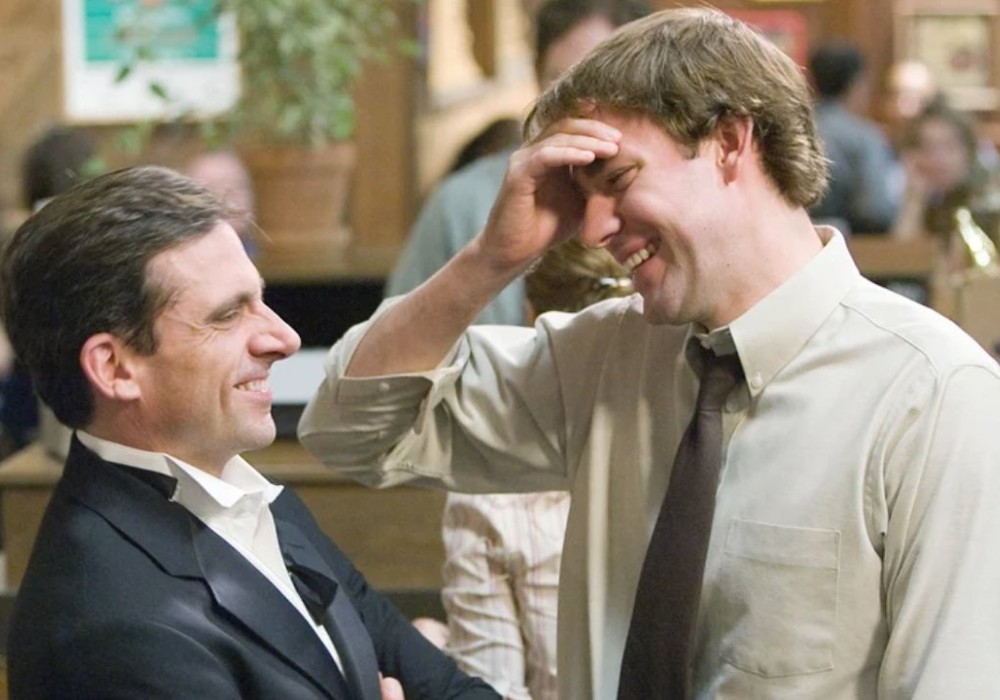 After long days and weeks of dealing with the COVID-19 pandemic, John Krasinski is desperate for some good news. This week – from his home office in self-quarantine with his family – the 40-year-old actor launched his new YouTube series titled Some Good News. And, Krasinski surprised fans by reuniting with his The Office co-star Steve Carell, who appeared as the show’s “entertainment correspondent.”

After asking his fans to send him some good news stories, Krasinski put together a 15-minute show, complete with graphics provided by his young daughters – Violet and Hazel – whom he shares with wife Emily Blunt.

Krasinski opened the show by saying that he has been wondering for years why there isn’t a news show dedicated entirely to good news. After asking his fans to send him some examples, he said they delivered plenty heartwarming stories and he decided to make his own show because of it.

“So, ladies and gentlemen, this is your fault, and this is ‘SGN.’ I’m John Krasinski, and if it isn’t clear yet, I have absolutely no idea what I’m doing,” said The Office alum.

Krasinki’s show format was just like a stereotypical local news broadcast. He sat at his home office desk wearing a suit and tie while shuffling papers and reading headlines. After sharing some feel-good stories from around the world, Krasinski brought in Carrell via Zoom to talk about the 15th anniversary of The Office.

“I was a waiter when I got that job, I was 23 years old. After the pilot, I went back to waiting tables because I was sure nothing was going to happen with it. We all kind of came into it with that vibe. I remember none of us had done anything huge,” said Krasinski, as Carell laughed.

“It’s such a happy surprise that after all these years people are still tuning in and finding it today, it’s pretty cool,” Carell said.

THIS IS ALL I'LL BE THINKING ABOUT FOR THE NEXT WEEKS, EVERYONE SAY THANK U JIM HALPERT AND MICHAEL SCOTT pic.twitter.com/DKZamxeKQ8

Krasinski and Carell recalled their favorite scenes and moments while shooting the iconic workplace mockumentary that ran for nine seasons. Since it premiered on March 24, 2005, this week was the perfect time to reminisce.

Just like many fans of The Office, Carell said his favorite scene was from the famous “Dinner Party” episode when Michael Scott proudly shows off his micro-flat screen TV. Other favorite episodes included the Fun Run when it was “about 105 degress outside,” and a Christmas episode where Michael Scott was Santa and Kevin (Brian Baumgartner) sat on his lap.

The duo also touched on Carell’s exit from the show, and Krasinski said that filming the scene where Michael Scott left was “the most emotional I’ve been on set.” They also teased a possible reunion of The Office someday, but first they just want to “reunite as people” after the COVID-19 pandemic passes.

KUWK: Kylie Jenner Admits She's 'Most Likely' To Get Pregnant Next Out Of Her Family Members