Angelina Pivarnick is officially in wedding mode. The Jersey Shore star went on a popular diet in order to prepare her to get in shape for her wedding this fall.

Angelina received help from a very special friend. Vinny Guadagnino assisted her with getting on the keto diet.

She told E! News: 'So I listened to Vinny, which is so cute and I sort of did half keto. I kind of followed [keto], but on Sundays I gave myself a cheat day, which I think Vinny does, too. I basically followed what Vinny told me to do. Never in a million years would you think that I would be listening to Vinny. Vinny's been amazing and I really appreciate that he's helped me get ready for my upcoming wedding'

Her fiance Chris Larangeira can't get enough of his future wife's new look. 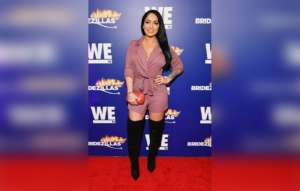 As for what caused the weight loss, Pivarnick credits it to diet because she doesn't work out a lot.

'I do cardio. I really can’t lift weights because my back is injured from being an EMT. But I’m allowed to walk on the treadmill and I’ll do an incline sometimes. But it’s really all diet.'

The injury that she is referring to is one where she threw out her back trying to lift a 450-pound patient while working as a paramedic.

The reality star hasn't been the same since. She has opened up about how the fateful day sent her into a deep depression that she is constantly dealing with.

'It’s been a struggle. I am not the same. I’ve been struggling with depression due to a lot going on in my life. And sometimes it doesn’t even have to be anything, I just get depressed out of nowhere.'

Hopefully, between her new diet and therapy sessions -- Angelina continues to work on improving her mental health.

Tristan Thompson Has Fans Criticizing Him Following This Message