Just months after their June wedding, Brittany Cartwright has been seen cradling what could be a baby bump. The married couple has talked about starting a family as soon as they got engaged.

Jax Taylor is recently grieving the loss of his aunt. He went back to Michigan to be with family after expressing his sadness on social media.

The Vanderpump Rules star lost his father in 2017 which is still heavy on his conscience. The reality star tweeted that he just couldn't deal with any more loss after his father, two close friends, and now his aunt.

Meanwhile, Brittany went home to Kentucky. While being helped with luggage by her husband, she was seen in a loose-fitting top with her hand cupped on her stomach. 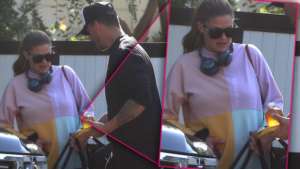 The SUR bartender went from resident bad boy to married life within just a few seasons. With a cheating scandal taking center stage just before the proposal.

Jax, who expressed that he never wanted marriage and a family, has allegedly done a 180. Both of the Bravolebrities have said that they want to welcome a baby not long after tying the knot.

'When it happens, it happens. We’re not going to be very careful. We’re gonna let it come with God’s grace, and he’ll give us a baby when it’s ready,' Brittany told US Weekly.

Meanwhile, Jax revealed: 'We’ve been together for four years and my whole life has been a party, so I’ve done everything I wanted to do. I’m ready for the next step. I’m ready to have kids. I’m ready to be part of the PTA, soccer dad, soccer mom, gymnastics coach, whatever. That’s my next job.'

Taylor and Cartwright have recently become homeowners and are taking their Mamaw's beer cheese venture seriously. Jax also has a drink line called Justaddx in addition to their hefty VPR salary.

Perrie Edwards Is Expecting Her First Child - Check Out Her Excited Announcement!

Kenya Moore And Her Daughter, Brooklyn Are Featured On The Cover Of Alpha Magazines

David Adefeso Praises His Mother - Check Out The Video He Shared