Rasheeda and Kirk Frost's relationship has come under fire after fans reignite rumors that she married her husband at 17-years-old. A blog has revealed that the Love and Hip Hop star has merely been lying about her age.

After a few tweets went viral that Kirk groomed Rasheeda by adopting her at 15 and marrying her at 17 -- the two took to social media to shut the speculation down once and for all.

They told the 'conspiracy theorists' to worry about their stimulus checks and not about their marriage.

This whole thing is an issue because the Love and Hip Ho star is supposed to be turning 38 in May when she recently celebrated her 20th anniversary to Kirk -- which would make her age 17 at the time they took their vows.

However, Gossip Of The City (the blog that has broken many stories) has pulled out the receipts. It stated that her maiden name is Rasheeda Buckner and she graduated with the class of 1994 at North Clayton High School.

By calculations, this would make her 44-years-old.

The blog went on to spill more tea from a source who alleged that they were Kirk's ex-girlfriend.

The woman claims that she was dating Kirk, who was friends with her brother, first.

She went on to reveal that she was friends with Rasheeda who started dating Kirk later. She added that Kirk did not adopt Rasheeda but the rapper was always around him because her mother moved away. 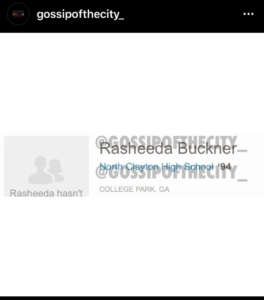 This all comes after fans started comparing Frost to R. Kelly.

The couple has gone through enough scandal already.

From multiple breakups and makeups to a baby outside of his marriage -- the Frosts are determined to make it work.

It's not uncommon for people in the industry to lie about their age. Viewers are still questioning how old Karlie Redd is.

What do you think about this latest development?

Rasheeda Frost Shares A Sweet Clip Featuring Her Son, Karter Frost That Will Make Your Day

Tiny Harris And T.I. Address Love, Marriage And Hot Issues On ExpediTIously! Fans Love How Tiny Stands Up For Women