Hailey Bieber is firing back at pregnancy rumors and called out the tabloid magazine Us Weekly while doing so. Hailey has long been the subject of pregnancy rumors and speculation is always running high that she and Justin are going to start their family. Whenever the high-profile celebrity couple purchases a house, speculation immediately turns to how many rooms the mansion has and whether there is enough room for children to play in the yard (like how could there not be?). The speculation isn't limited to real estate either. Plenty of people focus on what Hailey Bieber is wearing, constantly in search of a baby bump. Never mind that Hailey practically spent her summer in bikinis and continually shows off her flat abs. Or that many celebrities are emerging from the Coronavirus quarantine with babies and baby bumps they kept hidden, such as with Mindy Kaling .

This time, Hailey fired back about a story that she believed Us Weekly was planning to print about another suspected pregnancy. Us Weekly hasn't responded to the claim to say whether they had a story in the works. Hailey also called out the publication for their unverified sources who always seem to dish on celebrities but never back up their claims with a name.

RELATED: Justin Bieber Shares Adorable Pic Of His 2-Year-Old Sister And Showers Her With Love!

Since I know you guys were about to break your lil story Us Weekly, I'm not pregnant. So please stop writing false stories from your 'sources' and focus on what's important, aka the election. 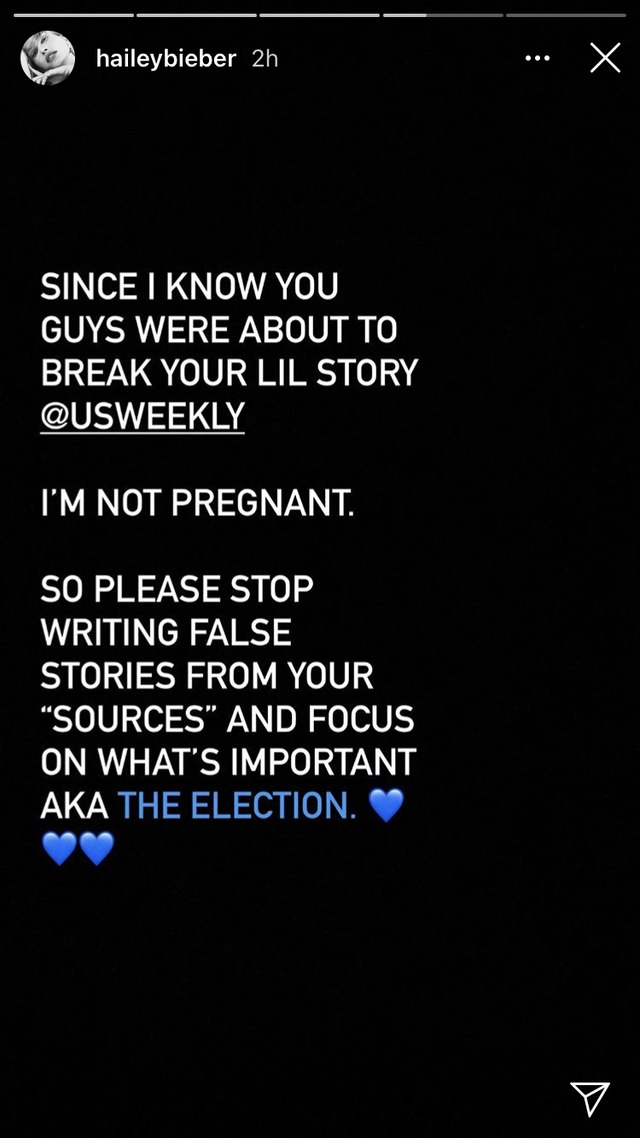 RELATED: Justin Bieber And Hailey Baldwin Go On Road Trip Across America In His Tour Bus!

Since Joe Biden and Kamala Harris have been named the new president and vice president, Hailey hasn't further addressed the pregnancy rumors. Instead, she, like many other celebrities, are celebrating President-elect Joe Biden's win.

What do you think about the way that Hailey Bieber dealt with the tabloid gossip?

Upon Being Asked About The Viral Images Of Her And Hailey Bieber At The Event, Selena Gomez Responded

In One Of Her Many Halloween 2022 Outfits, Hailey Bieber Wowed In A Stylish Vampire Getup

Is Selena Gomez A Slob?