Evan Rachel Wood may not be able to press charges on Brian Hugh Warner aka Marilyn Manson , whom she alleges abused, tortured, and terrorized her, but others can. Evan turned to her official Instagram account on February 1, 2021, to make her allegations against Marilyn Manson known. It was the first time she named her alleged abuser publicly, though it wasn't the first time she spoke openly about the crimes she says he committed. Evan Rachel Wood stated that Marilyn Manson groomed her when she was 18-years-old and he was 36. In 2007, they went public as a couple and were engaged until 2010. Evan says that those years have left her scarred for life with panic attacks, night terrors, anxiety, and more. Instead of giving in to fear, she fought back.

In 2016, Evan began speaking publicly about an abusive relationship she had been in. She didn't name her abuser but it wasn't too difficult for people to realize she was speaking about Marilyn Manson. In February 2018 she spoke  before the House Committee as a survivor of domestic violence and used her voice to help the panel see the need for the Sexual Assault Survivors’ Bill of Rights Act.

The next year, in 2019, Evan testified before the California Senate on behalf of the Phoenix Act. It is an act that she championed alongside California Senator Susan Rubio who is also a survivor of domestic abuse. The Phoenix Act extends the statute of limitations in domestic violence cases giving victims up to 10 years to bring charges against their abuser.

The statute of limitations has passed for Evan's case, but not for Gabriella's , an artist who says she was in a six-month relationship with Manson and suffered tremendous abuse , including repeated rapes. As the women contend that Marilyn Manson is a serial abuser, they are asking all women who have proof that Marilyn Manson has abused them, and whose case falls within the statute of limitations to bring their cases to law enforcement.

Senator Susan Rubio approached the U.S. Justice Department calling for an investigation into Brian Hugh Warner aka Marilyn Manson. You may see a copy of her letter to FBI Director Christopher Wray below. 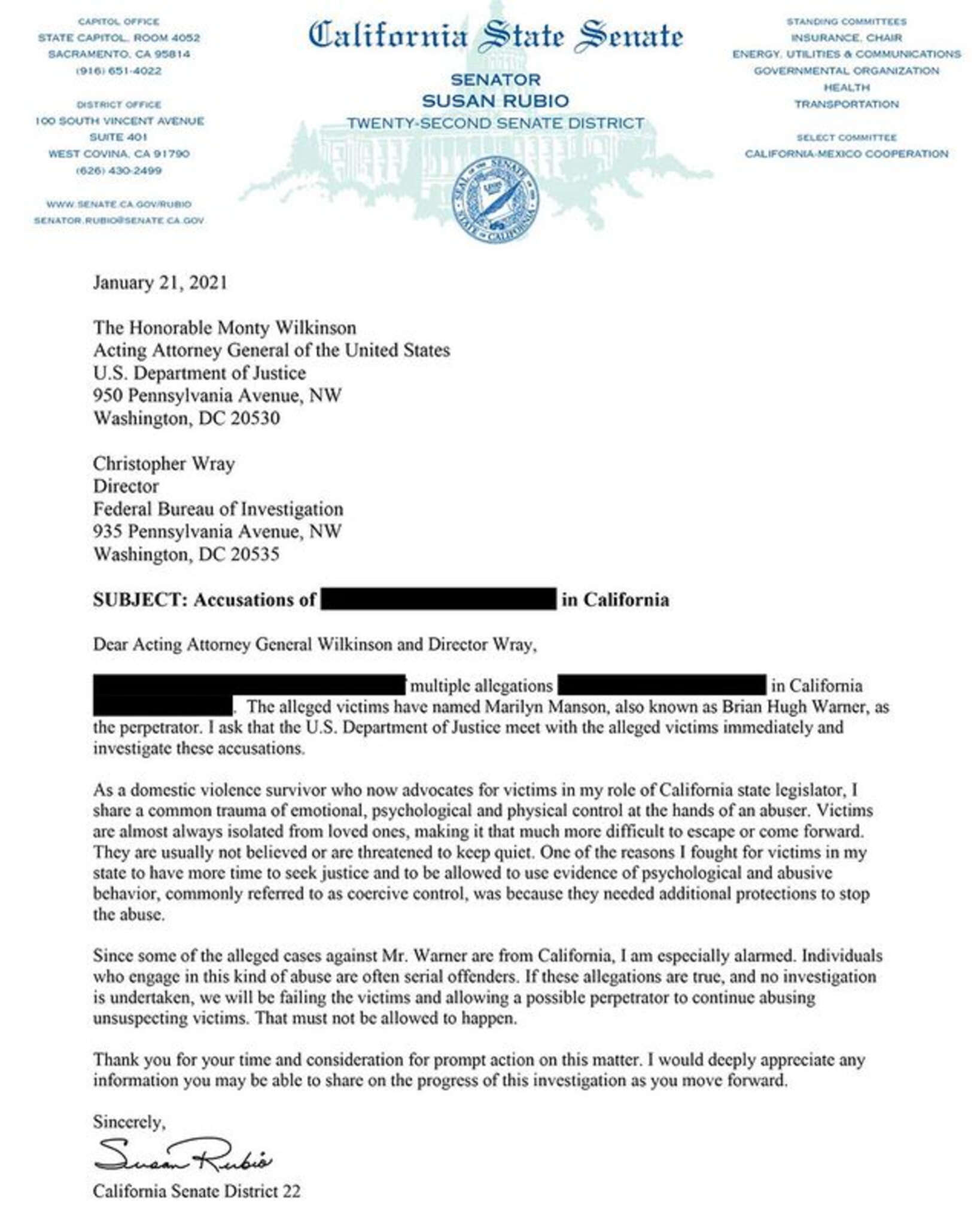 Additionally, Evan Rachel Wood shared a message on her official Instagram account, where she has 943,000 followers, providing instructions to those who want to file a police report against Brian Warner. She does caution those against filing false police reports as well.

If you wish to file a police report in connection to Brian Warner (Marilyn Manson), here are instructions from the Los Angeles Sheriffs Department. I am also posting a quick run down of what to expect when you file a report, as well as any ramifications that may ensue from filing a false report. 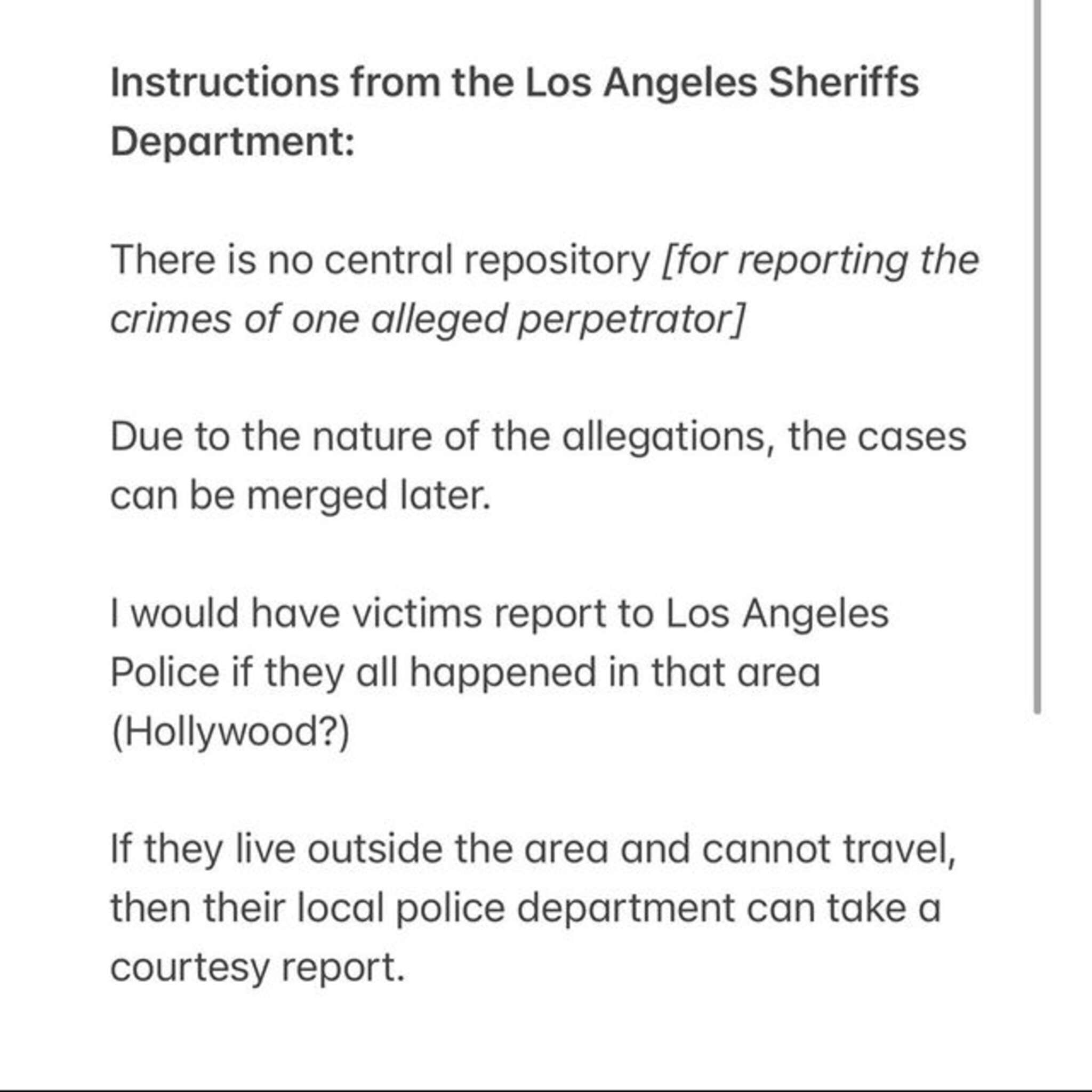 You may see a video featuring the women's statements and testimonies against Marilyn Manson below. The women who have come forward include Evan Rachel Wood, Sarah McNeilly, Gabriella, Ashley Lindsay Morgan, and Ashley Walters below. Included is the video of Evan Rachel Wood testifying before the California Senate with Senator Susan Rubio.

At this point, it is unclear whether charges will be filed against Marilyn Manson, but the calls for an investigation are growing louder each day.

Since the women have come forward with their allegations, Marilyn Manson has been dropped from his agency, his record label, the Starz series American God s, and his appearance in an upcoming Creepshow episode on the Shudder network has been scrapped.

Gabrielle Union's Fans Are Completely In Love With The Shady Baby, Kaavia James

Jordyn Woods Had The Best Girls Night - See Her Video

Gervonta Davis Is The Winner At The Staples Center

Erica Mena Is Showing Love To All The Mothers Out There