Esme Bianco Says Marilyn Manson Human Trafficked Her, Has Spoken To The F.B.I.

Esme Bianco is the latest woman who publicly accused Marilyn Manson of abuse. For Esme, her allegations involve a different scenario than those of women who say they dated the singer. Because Esme lived in the UK and traveled to the U.S. to appear in one of Marilyn Manson 's videos, she is accusing the 52-year-old shock rocker of human trafficking. She stated in an official Instagram post people need to rethink the definition of human trafficking as she pointed out that intimate partners, boyfriends, and husbands can traffic people.

Even though Esme says her initial encounters with Marilyn Manson were abusive, she continued to keep in touch with Manson via email. They allegedly met up for sexual rendezvous when their schedules allowed. Two years later, in 2011, Bianco left her husband and moved in with Marilyn Manson, believing the two were soulmates. In an interview with the Cut, Esme alleged the abuse only intensified and within two months, she left.

You may read Esme's interview with The Cut, where she speaks about the alleged torture and abuse she experienced while in a relationship with Marilyn Manson below.

I am naming the person who abused and human trafficked me. His name is Marilyn Manson, born Brian Hugh Warner. I am coming forward after years of living with the unthinkable trauma I endured at the hands of the serial predator known to many as Marilyn Manson. I am speaking up now, in my own way, and sharing this story with others because he must be held accountable. No one should ever go through what I - and so many other survivors - have experienced. It’s important that we all understand that intimate partners, boyfriends, and husbands can abuse and traffic people. We must address the misconceptions around human trafficking because it can happen to anyone like it happened to me. 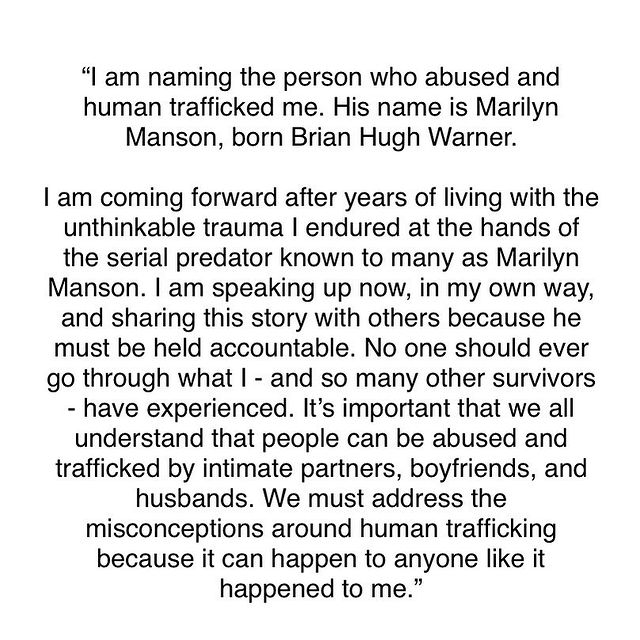 Esme spoke to ABC News in an exclusive interview and revealed that she has spoken to the F.B.I. You may see that video below.

What do you think about the abuse allegations against Marilyn Manson? Were you surprised to see Esme Bianco accuse Marilyn Manson of human trafficking?