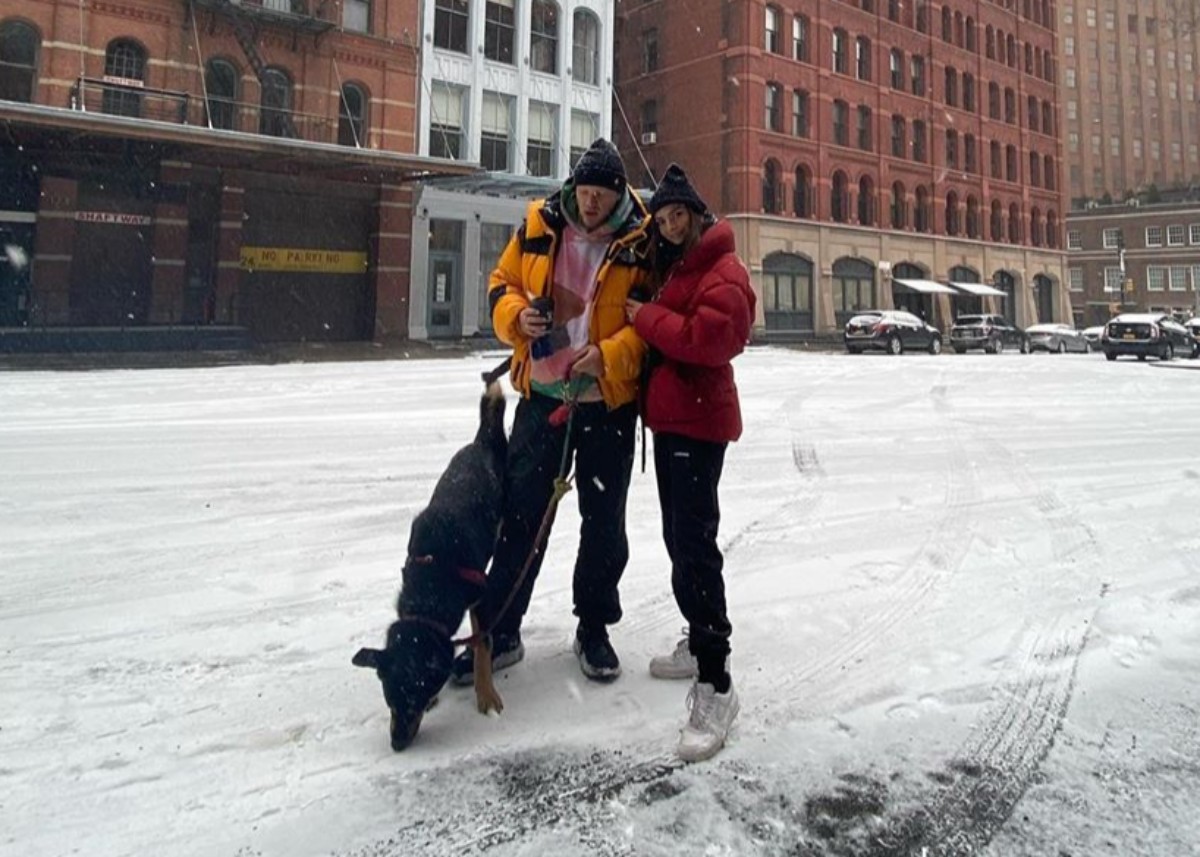 Emily Ratajkowski may be a supermodel but make no mistake about it, she is extremely family-oriented. She surprised people when she married actor, writer, director, and producer Sebastian Bear-McClard (Uncut Gems) and the two have gone on to enjoy a happy marriage. They frequently spend time together in public and expanded their family by adopting a rescue dog named Colombo.  Emily isn’t pregnant, but you know what they say about families starting off with a pet before deciding to have a child. There are many fans who are hoping that Emily will catch the baby bug from her good friend Ashley Graham and announce she and Sebastian are expecting, but until then, there are plenty of special family moments that she shares with her fans featuring Colombo. On Saturday, Emily shared a photo slideshow featuring Colombo’s first day in the snow!

It is clear that Colombo is their baby and the photos and video of Colombo staring as the snow fell on his nose are simply adorable. There are photos of Emily and Colombo, Sebastian and Colombo, and the couple playing with Colombo in the snow. Emily shares plenty of photos of Colombo, but his first snow day is resonating with fans and animal lovers who are thrilled that Emily and Sebastian rescued Colombo instead of adopting a dog from a breeder.

You may see the photo slideshow, including the video, of Colombo’s first snow day below.

Emily has shared numerous videos of Colombo with her 25.2 million Instagram followers and the paparazzi are always on hand to snap pictures of Emily and Sebastian as they walk Colombo outside of their New York home.

In one photo that Emily shared that went viral, Emily sat back and cradled Colombo in her arms as if he were a baby and you could see that Colombo was eating up the attention. Colombo looks like he is a fiercely loyal dog that will protect Emily and Sebastian, so hopefully, those paps are using a long-lens camera when they are snapping photos of the family taking Colombo for his walks!

Look at the size of Colombo!

Colombo and I are ready for 2020 with our @kerastase_official family. Working with @rosacarricopics and the rest of the Kerastase team including @inezandvinoodh has been one of the highlights of the last two years of my life! Very grateful. Merci pour tout!

What do you think about Emily’s and Sebastian’s day out in the snow with Colombo?

There are many celebrity pets who draw public attention but so far, Colombo is getting his own fans and people are simply shocked by how much he’s grown. Are you a fan of Emily’s and Sebastian’s?